Was Ancient Greek Theater Only for Men?

by Ben Potter
A quick search of our homepage will reveal that a copious amount of ink has already been spilt discussing the life and works of the great practitioners of Athenian theatre: Aeschylus, Sophocles, Euripides and Aristophanes.
However, leaving aside these individuals for the moment, brilliant as they may have been, what of the vehicle of delivery itself? No, not the actors, nor even the venue, but the festivals in which seminal works such as Oedipus Rex, Electra, Ajax, Orestes, Prometheus Bound, The Wasps, The Knights, and Philoctetes were showcased? 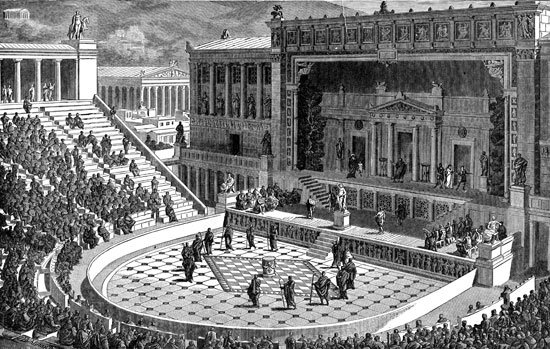 The two major Athenian theatrical festivals, The Lenaia and The City Dionysia were held in honor of the god Dionysus. Calling them theatrical, whilst not misleading, isn’t wholly illuminating as they were merely primarily, not exclusively concerned with theatre.
The Lenaia lasted for four days during January/February and, because of the time of year, was almost exclusively attended by Athenian residents, due to little winter shipping in the Mediterranean.
The Lenaia was originally a festival of comedy (although tragedy was introduced in 488 BC), probably because there was more scope for political and social ‘in-jokes’, as the audience would have consisted of few non-citizens.
Alternatively, the City (or Great) Dionysia lasted six days and took place in the spring (March/April). Consequently it could have been attended by citizens from Athenian colonies (in addition to friendly travelers) because shipping would have resumed by this point.
Two things are noteworthy about the City Dionysia. Firstly, it was solely a festival of tragedy until 432 BC, and it was the main event, the big deal, the Oscars to the Golden Globes of the Lenaia. Secondly, it seems the Dionysia was ‘more religious’ or, perhaps, more preoccupied with traditional religious practice than the Lenaia. 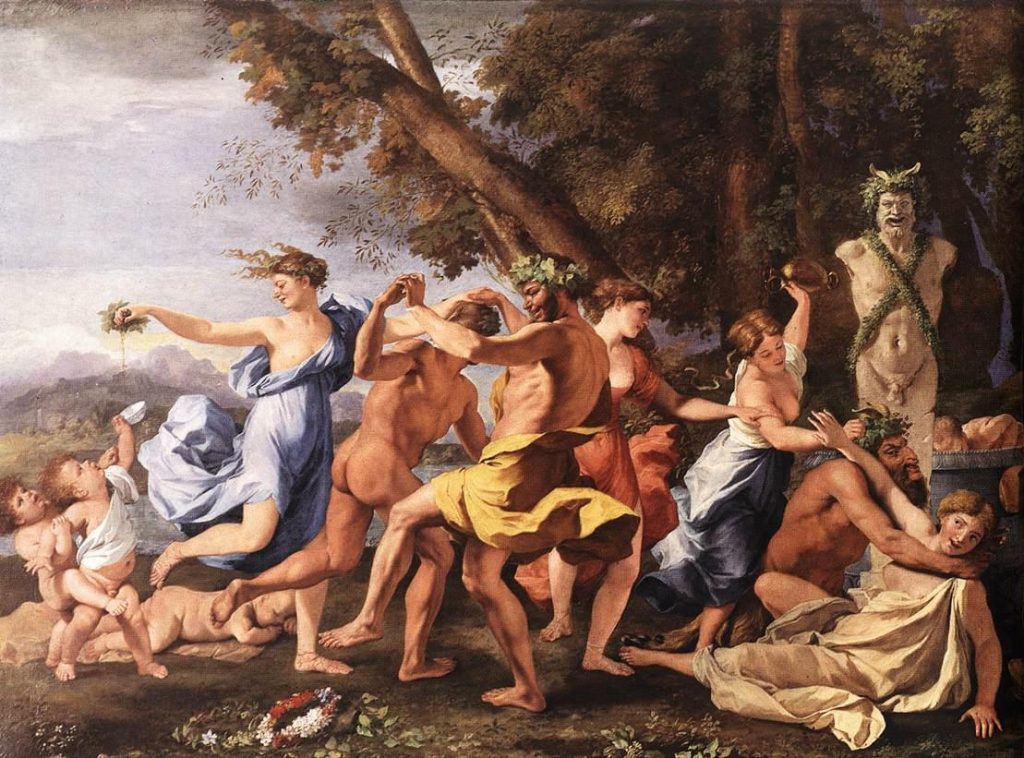 Before a statue of Pan
by Nicolas Poussin

Supporting evidence comes from Oswyn Murray in his comprehensive Early Greece: ‘the festival involved an annual procession of the ancient statue of Dionysus from Elutherai (a mountain settlement on the northern borders with Boeotia) to Athens’.
This shows us that if one wished to take in a show then, at the very least, one would have to feign interest in a religious procession.
Classics professors looking to justify their tenure have made a lot of the ins and outs of these two festivals. However, something really interesting, and still now ambiguous, is the role women who were allowed or obliged to play in them.
Women would certainly have had a role to play in the holy procession and been given a share of the rare and delicious animal sacrifice. Additionally, women were generally a vitally important part of most Dionysian rituals in their official status as his Maenads/Bacchae (specific female acolytes).
Beyond this, things get a little sketchy, as reliable evidence for Athenian women (their lives being private, domestic and illiterate) is scarce. However, we do have reason to believe women were allowed to attend dramatic festivals even if, like in Shakespearean London, they were not permitted to act in them.
We look to the comic masterpiece of Aristophanes, The Frogs to confirm this: ‘Every decent woman or decent man’s wife was so shocked by plays like Euripides’ Bellerophon that she went straight off and took poison’.
There is a school of thought that says women were perhaps allowed to attend tragedies, but not comedies.
The main argument for women being excluded from comic shows is that comedies would have been a ‘bad influence’ on the ‘easily susceptible’ (i.e. women), whilst tragedies had an important moral message to teach. This, however, does not hold up to closer scrutiny. In Aristophanes’ comedies the women behave no worse (and usually better) than the men, whilst in tragedies such as Medea we see a woman kill her babies. Additionally, in Agamemnon we see a woman kill her husband, and in Electra we see a woman kill her mother and display incestuous feelings towards her father. 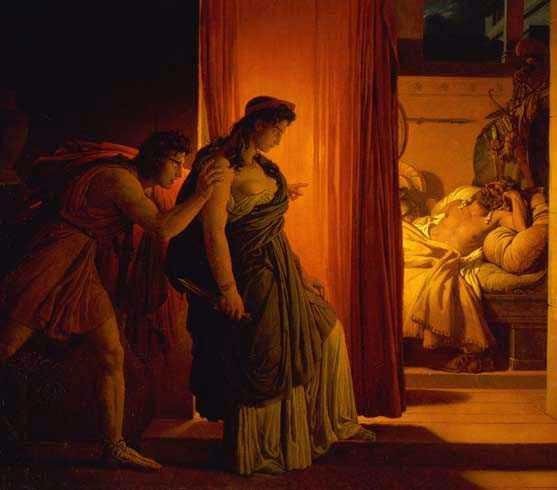 Thus it’s hard to imagine that the corrupting influence of bawdy jokes and toilet-humour would have been more damaging on the delicate sensibilities of Athenian lady-folk than tales of incest, murder, suicide, treachery and blasphemy.

Furthermore, if women could attend one branch of theatre, but not the other, then we may expect to be told somewhere why this was (or at least have it joked about by the waggish Aristophanes).
So were women supposed to learn important lessons at the theatre?

Most Athenian women (even of the upper classes) would have received little or no formal education whatsoever, so these infrequent visits to the theatre would have been probably the only opportunity for mass enlightenment.
We can see in plays such as Aristophanes’ Assemblywomen (396 BC) that an attempt is made to communicate ideas women may never have had the liberty to contemplate. The brief plot of this comedy is that the women of Athens obtain power of the city through an elaborate scheme in which they descend on The Assembly dressed in drag.
This play could be Aristophanes’ attempt to champion the rights of Athenian women by implying that not only are they capable of creative/devious thinking, but also that they may be suitable to play a political role. 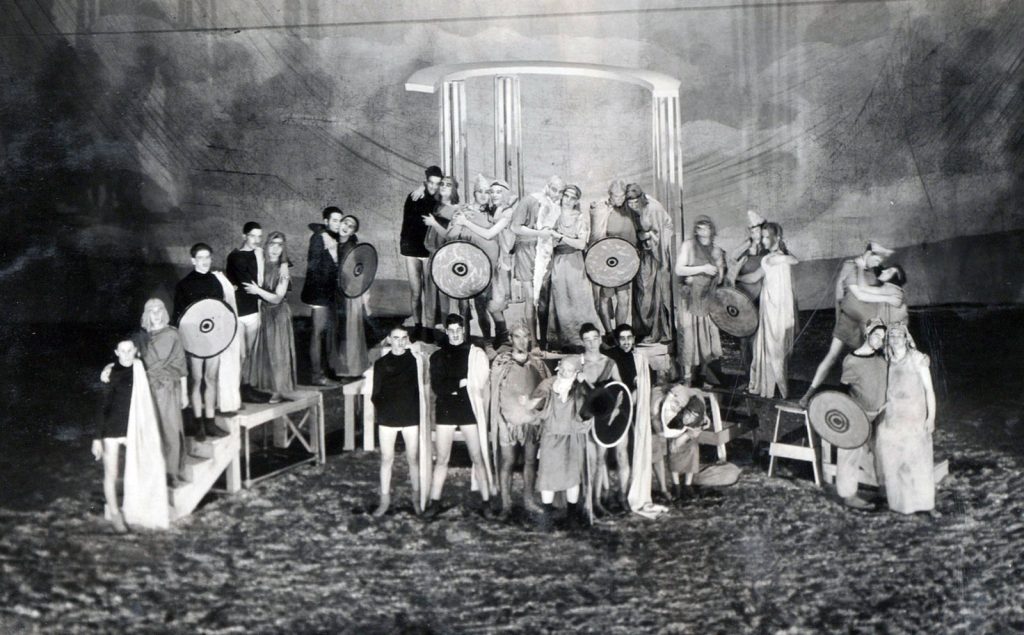 Likewise in Lysistrata (411 BC), in which the Athenian women go on a sex strike, Aristophanes could be challenging the existing system of the husband being kurios (master) over his wife. Such plot lines may have been seen as subversive, however if they were, would any serious message have had less of an impact when veiled in comedy? Perhaps so.
The argument that Aristophanes had no interest in transmitting a political or social message is groundless. Cambridge professor Paul Cartledge pointed out that the controversial and powerful demagogue ‘Cleon thought Aristophanes was worth taking legal issue with’ and Aristophanes actually rewrote his satirical Clouds to make it more strongly political.
Euripides was another major playwright who conveyed a strong message to his female audience; a very different and possibly more effective message than Aristophanes.
Euripides has been called everything from a misogynist to a feminist and was blatant in his attempts to suggest that ‘clever’ women should not be trusted. Most obviously in Medea (431 BC) where the title character is a woman who has given up her citizenship and then murders her children following her husband’s affair.
This powerful and emotive play could have been Euripides’ attempt to persuade women of Athens to stay loyal to the state, not be overly concerned or jealous about their husband’s extra-marital misdemeanors, and generally to be wary of concerning themselves in ‘male’ matters.
However, it could have been just the opposite. A message to women that they don’t need to put up with this sort of thing and a warning to men that, despite their great power and social status, despite the world being run by them, for them, they could lose everything they cared about in the blink of furious, female eye.
However, moving away from the speculative, we must address the very real possibility that women had little significance at all in the two festivals.
Apart from the actual opening procession itself, women may have had not much to do. Even assuming women were allowed to attend all the theatrical productions, perhaps none of the performances were geared towards them. 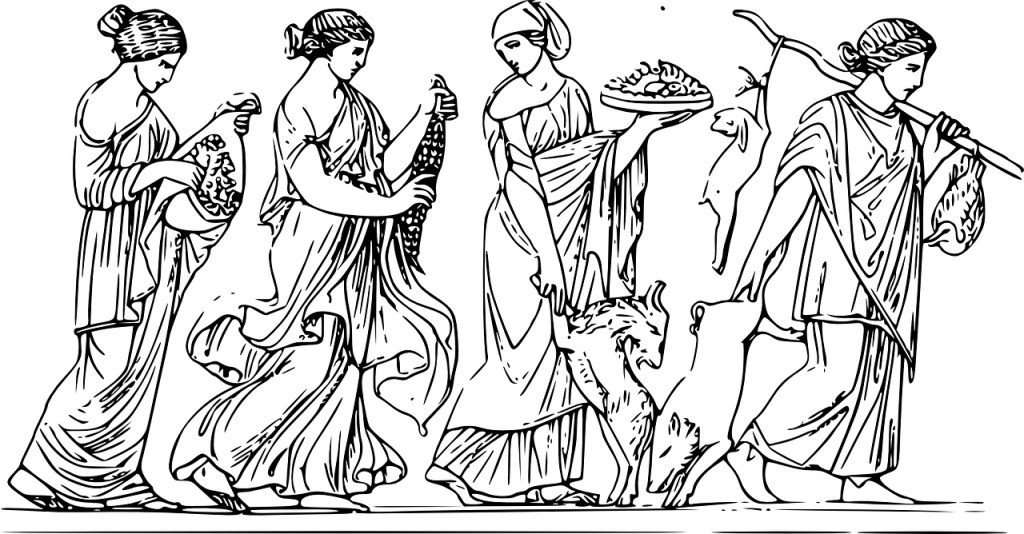 Likewise in Lysistrata it seems that the theme is more the obtainment of peace than sexual equality.
Euripides’ negative (or at least extreme) portrayal of women could easily be a reminder to Athenian men to keep close watch on their wives and perhaps not allow them too much freedom.

It seems that the main and key advantageous role women had at these festivals was to receive a preciously rare moment of education at the theatre. This, however, was no official or even planned act, but more the accidental vehicle by which individual playwrights could spread their influence further.
The fact that Athenian women would have had so little access to creative thinking and ideas would have meant that, for the individual women, this day would have been of great significance, even if their formal role in the festivals would have been rather limited.
Thus, we cannot really conclude on a truly positive note that theatre was a vehicle of emancipation that changed female Athenian society. What it was, however, was a pinprick of light in a life of repetition and banality, a highpoint of refinement, art, culture and beauty to liberate and elevate a class of society, which had less potential for social progression than the bevy of slaves who kept Athens ticking.
Even if only for a moment.
Facebook