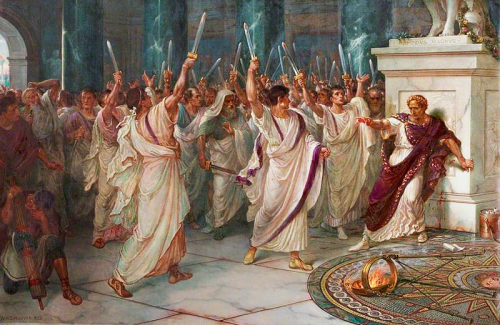 Et tu, Brute?
Whether or not Caesar once uttered those dramatic words, he probably did think it. After all, it was a literal backstabbing moment; Brutus was Caesar’s friend and protege. Of all the 23 knives that plunged into his flesh, that one would have hurt the most.
But Shakespeare’s famous line about the ancient world, “Et Tu, Brute”, also neatly encapsulates an ancient issue, that of personal sacrifice for the good of the nation. Brutus believed he was doing a virtuous thing by murdering his mentor. He was saving the Republic! Right!??

In the words of the Philosopher-Emperor Marcus Aurelius, “What is not good for the beehive, cannot be good for the bees”.
This is a thought echoed by a Philosopher-President and famous classicist, Thomas Jefferson, “the tree of liberty must be refreshed from time to time with the blood of patriots and tyrants.”
Indeed, there have been many incidents since that famous backstabbing when men (and women!) put the health of the ‘Republic’ ahead of friendship, party loyalties and even family lines.
Great! We’re all agreed then… It’s super easy. Murdering tyrants is a patriotic act. Brutus was a patriot, not a traitor.
But… Is it really that simple?
Who decides when it’s time to kill a tyrant? Or if the leader is a tyrant in the first place?
And is putting the State before personal relationships always moral?
And what happens, as was the case with the assassination of Caesar***, when it completely backfires and ends up destroying the very system they were fighting to save?
As always, you can reply to this email or write me directly at [email protected].
***Now, you may be asking why am I writing about Caesar and his death now. After all, the date of his assassination is famously etched into our collective consciousness as the Ides of March, almost three weeks from today.
Good question!
Well, we have another exciting announcement here at Classical Wisdom. We’ll be launching our brand new free podcast, “Classical Wisdom Speaks” on the Ides of March, which will include a discussion between myself and our associate editor, Alex, on today’s monday mailbag’s topic.
In fact, we’ll read out a few of the responses you send in on the air! So make sure to write in your thoughts on whether Brutus was a patriot or a traitor… whether it’s moral to betray someone for the good of the state…and when it is time to kill a tyrant?
Facebook

Tags: Assassination of Caesar, Ides of March, Julius Caesar, Times of Tyranny, When to Kill a Tyrant