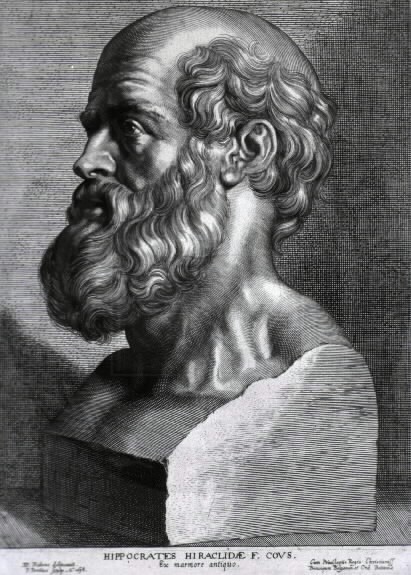 Hippocrates The Father of Medicine

Hippocrates embodied the perfect doctor: kind, wise, old, knowledgeable, with a long beard and profound wrinkles around perceptive eyes. At least that is what we’d like to think. While his fame was such to warrant a mention from the likes of Plato and Aristotle, not much is actually known about Hippocrates the father of Medicine. Consequently, he has become the projection of what people ideally want in a physician.
What we do know is that Hippocrates was born on the Greek island of Kos around the year 460 BC. He was a strong proponent for medicine, even when it was opposing the infrastructure of Greece. As a result he endured a period of twenty years inside a prison where he authored many famous medical works, such as The Complicated Body.
Beyond these details, however, much of exactly what Hippocrates wrote or said is unknown.
Despite this, Hippocrates is attributed with a great many wonderful deeds and thoughts. He is recognised as the founder of the Hippocratic School of Medicine, a college that revolutionized the understanding of medicine in Ancient Greece. Many of the invaluable lessons prescribed in that place of learning are assigned to Hippocrates. If that was the case, then it truly was Hippocrates, with his approach to healing and the role of the doctor, that influenced western medicine for thousands of years.

HippocraticOath – The Hippocratic Corpus, a collection of around seventy early Greek medical works associated with Hippocrates and his teachings

The most famous of his supposed contributions is the Hippocratic Oath, which bears his name accordingly. It was this document that first proposed an ethical standard among doctors when doing their work. It brings up important concepts we still use today, such as doctor-patient confidentiality.
The document reads: “What I may see or hear in the course of the treatment or even outside of the treatment in regard to the life of men, which on no account one must spread abroad, I will keep to myself holding such things shameful to be spoken about.”
This code of honesty was only part of a larger parcel of a subscribed behavior and lifestyle. One of the lasting prescriptions of Hippocrates was a detailed manner of professionalism, discipline and rigorous practice that changed the face of the budding industry.
Doctors should be well-kempt, serious, understanding and honest. They should have a clean room and instruments for their work, and follow through with precise techniques for bandaging and splinting. It even goes so far as to dictate the maintenance of fingernails.

Doctors should be well-kempt, serious, understanding and honest.

Furthermore, the Hippocratic school imbued physicians with the importance of meticulous observations and clinical documentation. Hippocrates himself apparently made considered and careful notes of patients’ symptoms, including pulse, fever, complexion, pains and excretions. He included family history and environment in order to have a comprehensive understanding of the individual’s situation.
It states in “On forecasting diseases” that: “First of all the doctor should look at the patient’s face. If he looks his usual self this is a good sign. If not, however, the following are bad signs – sharp nose, hollow eyes, cold ears, dry skin on the forehead, strange face colour such as green, black, red or lead coloured. If the face is like this at the beginning of the illness, the doctor must ask the patient if he has lost sleep, or had diarrhoea, or not eaten.”
Using the above tactics, Hippocrates, and his followers, were the first to accurately  describe and analyse some medical conditions. This included determining the clubbing of fingers, sometimes referred to as “Hippocratic fingers”, as an important diagnostic sign in chronic suppurative lung disease, lung cancer and cyanotic heart disease.

His methods for treating hemorrhoids, in addition, are still used today, though, thankfully, with more sophisticated instruments.
Finally, parts of his work in pulmonary medicine and surgery have not been improved upon since Ancient Greece. Hippocrates was the first documented chest surgeon and his techniques, while crude, such as the use of lead pipes to drain chest wall abscess, are still valid.
Some essential elements of Hippocrates’ teachings, however, have not continued into our present day.
Hippocrates belonged to a school of thought which emphasized prognosis above diagnosis. This meant doctors predicted outcomes based on statistical data, rather than discovering the exact problem faced by the ill individual.
Hippocrates philosophy also focused more on patient care and the “healing power of nature”. The idea was simple enough: nature, rather than the doctor, does the most healing. It is the job of the physician then, to not get in the way, but rather facilitate the recovery process with proper nutrition, cleanliness and sufficient rest.
“Primum non nocere. (First do no harm)”
This was fairly successful at the time and can be clearly demonstrated with the example of a broken leg. Rather than interfering with the bone’s natural ability to restore itself, the physician should set up a brace or splint to help the patient maintain an immobile position.

This passive treatment was effective for relatively simple ailments, but was the source of serious criticism over the subsequent centuries from more modern doctors. For example, the French physician M. S. Houdart called the Hippocratic treatment a “meditation upon death”.
While the future of medicine went on to follow the opposing system of emphasizing diagnostics, there was another monumental contribution of Hippocrates the father of medicine. He is credited with being the first individual to believe that diseases were a naturally occurring phenomenon, rather than the result of gods or superstition. He argued that people got sick from environmental factors, like diet and lifestyle, rather than a punishment inflicted by the gods.
This separation of medicine from religion made the entire study of disease, and its potential cures, possible. Is this what made Hippocrates the ideal physician? Offering cures over prayers? Or was it his attention to detail and professionalism which he brought to the industry? Or was it his ethical standards and morality when dealing with patients? Either way, the man who founded the Hippocratic school brought a whole new light and level to the field of medicine, saving who knows how many lives along the way.
Facebook