Plato’s “Apology” And The Wisdom Of Socrates

“The Apology” recounts the speech Socrates delivers to the court of Athens that means to put him to death for his odd practices. He is charged with “corrupting the youth and believing in strange gods” a crime that was punishable by death in ancient Athens. Socrates would have had some choice words for the man who had all the answers. Only a fool would truly believe that he had solved, absolutely, the mysteries of life.
So let us examine the wisdom of Socrates. Let us consider the true nature of wisdom. Let us consider what convictions are worth clinging to, even in the face of death. And for once, let us all concede that we do not have all the answers.
As a general disclaimer, before we delve head first into this, we must first recognize that “Apology” was not written by Socrates himself. It was put to paper by his disciple Plato. We must be careful of accepting everything Plato wrote without hesitation. Plato wrote his philosophical essays in the form of dialogues, where Socrates would often be used as a puppet to explain the ideas of Plato. It is difficult to decipher where Socrates ends and Plato begins.
Saying that, “Apology” by Plato, although being rather dramatic, is generally accepted as an accurate representation of Socrates and his ideas on wisdom and the prospect of death.
1. Socrates On Wisdom 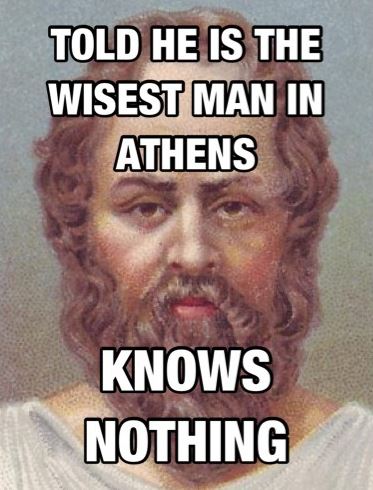 At the opening of “Apology”, Socrates stands before a court of Athens as he faces his accusers who wish to see him put to death. His accusers are Anytus, Meletus, and Lycon, all prominent Athenians who were prompted by politicians, poets and craftsmen to pursue the death of Socrates. Socrates addresses the crowd witnessing his trial and assures them that the charges against him are “false” and “slanderous”. He claims that these charges were brought against him because he possessed a wisdom that was “peculiarly human”. What wisdom does Socrates speak of?
Socrates had recently been informed by the oracle at Delphi that he, of all men in Athens, was wisest. Socrates is very skeptical of this claim. How is it that he could be wisest when Athens possesses so many notable politicians, artists and poets? Surely there must be some mistake. So Socrates describes how he first would visit with the politicians of Athens. Surely if he were to converse with these notable men of government, he would find that they possessed great wisdom.
Socrates learned that the politicians, as is common with politicians, believed themselves to be very wise and the people as well thought them to be knowledgeable of all good things. Yet, they were not wise men. Socrates would try to show this to them, to shake them from their undeserved sense of superiority, and they would refuse him. The politicians would become angry at Socrates, and they would denounce him and send him away.
Socrates again spoke with poets and craftsmen of Athens. They all appeared to have some knowledge of things, yet they too believed themselves superior and unduly wise. They would also become angry with Socrates for his insistence that they really knew nothing. Socrates would then come to form his conclusions about true wisdom and the nature of being wise.
Wisdom is humility, accepting that we know very little or nothing at all. Socrates describes this conclusion when he states “I am wiser than that man. Neither of us probably knows anything worthwhile; but he thinks he does when he does not, and I do not and do not think I do”. Socrates is considered the wisest man in Athens by the Oracle, because instead of assuming he possesses wisdom, he accepts that wisdom is often unattainable and that we should instead continuously purse new and truer knowledge.
2. Socrates On Politics
So if Socrates is the wisest man in Athens, why does he not use this wisdom for the benefit of the city? He should enter politics and become influential within Athens, right? Socrates briefly tried his hand at politics. The philosopher, for a time, was the senator representing the tribe Antiochis. He oversaw the trial of several Athenian generals who were accused of failing to collect the bodies of fallen soldiers after a decisive naval battle. The generals were tried together, which was illegal, and they were threatened with death for their mistake. It was then that Socrates discovered a fatal flaw within democracy.
The crowd, as well as the city, overwhelmingly opposed the generals. In response, the other judges of the trial went to great lengths to ensure the deaths of the accused. In this way they would gain great favor with the citizens of Athens. Socrates found this behavior disgraceful. Although these generals had not upheld their duties, justice as well as Athenian law should declare that they were undeserving of death. Socrates cast his vote to save the generals and was met with political backlash. The citizens hated him, threatened his life and demanded his impeachment. Socrates stood firm in his commitment to justice. He declares, “I cared not a straw for death. My only fear was the fear of doing an unrighteous or unholy thing”.

Despite Socrates’ attempts, the generals would be put to death. Socrates himself would quietly slip away from politics. Shortly after, Athens would encounter a brief political revolution and democracy would be replaced with an oligarchical rule. Socrates considers himself to have been saved by the oligarchical leaders who were not slaves to the desires of the people. From these experiences, Socrates has grown to distrust politics. It is a system that denies justice and virtue, and instead produces evil, greedy men who look to control the throngs of foolish voters. Socrates insists that he is better off lecturing in the streets, showing the citizens the path to wisdom and revealing true virtue in the process.
We must be careful at this point. Plato deeply hated democracy. “Apology” would have been written after the death of Socrates, who very much was killed through a democratic process. It is understandable that Plato would despise democracy for it’s role in killing his mentor and friend. It is possible that the dangers of democracy described here are actually Plato’s ideas filtered through the character of Socrates. We may never know for sure.
3. Socrates On Death And The Immortal Soul
During the course of the trial, Socrates begins to discuss the notion of death. His life very much is on the line, yet he seems to be unrepentant. He insists that if he were acquitted, he would continue his lectures, he would never denounce philosophy. Socrates shall not abandon his integrity and admit to these false crimes. He does not fear death. How can this be? 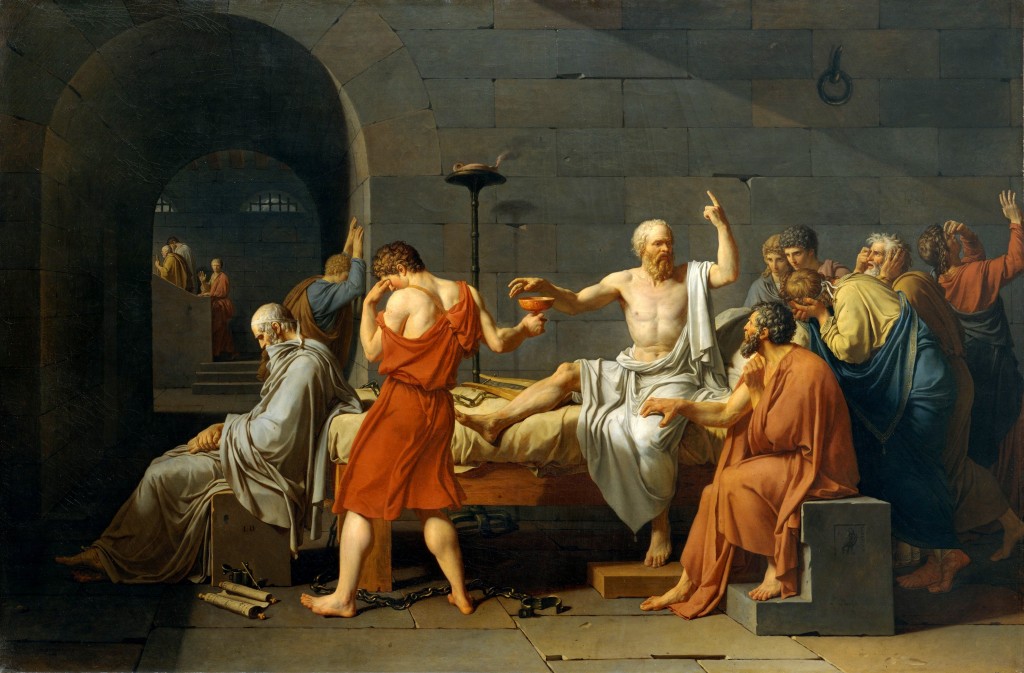 The Death of Socrates, by Jacques-Louis David, 1787

Socrates concludes that death is either a state of permanent unconsciousness, like a dreamless sleep, or death is a moving on of the spirit to another realm. Either would be taken as a blessing. If death is like a dreamless sleep, then it would be a great gain according to Socrates. Peace for the man and the soul, eternally and without interruption, would be something that even a king could not denounce.
And if death is a pilgrimage of the soul, then Socrates would gladly make that journey. He would look forward to meeting with the deceased who have gained fame for their great deeds. Would it not be magnificent to converse with the likes of Homer or Odysseus? Socrates could spend his time conversing with Agamemnon and Ajax from the Trojan war. In this new immortal realm, Socrates could continue his pursuit of wisdom and true knowledge. He could interview the ancient heroes and learn which of them are wise and which are fools. Death, perhaps, would be a welcome reprieve from life.
4. Socrates On The Purpose Of His Life
Socrates, by now, has been sentenced to die by a narrow majority. Instead of begging for his life, he recounts the purpose of his existence, standing beside his convictions until the very end.
Socrates tells us that it was not through chance that he lived the way he did. He was chosen by the Gods to stir Athens from it’s laziness and self assured contentment. Like a gadfly might urge a lazy horse, Socrates attempted to shake Athenians from their slumber. He has been divinely guided to pursue knowledge and to help others find true wisdom. All through his trial he has been given no sign from God to repent, to beg for his life. So he now concludes that it is a far better thing for him to be relieved from this mortal world. Socrates tells us that death is a noble and inevitable end for all men; living unrighteous lives, however, is a sin that will truly haunt the soul. 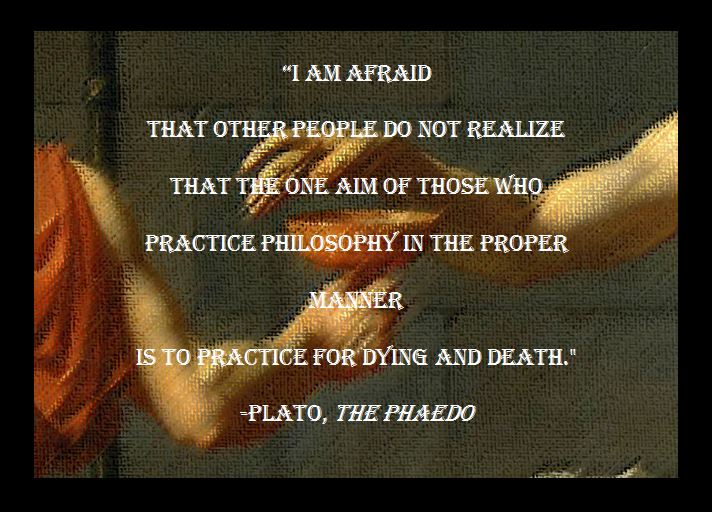 Socrates speaks to the audience and claims that “they will not easily find another like me”. And that Athens, for all it’s supposed wisdom, will ironically be remembered as the city that killed the wisest man of all. He remarks that even if he were given the chance to live, on the condition that he denounces his lectures and philosophy, he would still rather die. For the greatest life is the life that continuously discusses virtue, and explores the bounds of true wisdom. And the life that is unexamined, is not worth living. Socrates says his goodbyes to the crowd. He tells them that they must now depart. He must go to die, they must go to live. And only God will know which course is better.
As “Apology” comes to a close, I can not help but feel a sense of loss for a man I never met who lived in a time that I will never know. The first intellectual martyr of Western civilization, Socrates’ legacy would be long remembered and deeply loved. As I imagine Socrates saying goodbye to his friends in Athens, turning to face his death, I am reminded of the words of Charles Dickens from his classic novel “A Tale Of Two Cities”.