by A.P. David – You can Read Homer the Poet and Fate – Part One by A.P. David HERE: https://classicalwisdom.com/homer-the-poet-and-fate-part-one/
The problem with a budget is that it cannot be changed mid-stream. In the period prior to its passage, a budget is a field of endless conflict and negotiation. Anything is possible at that point. But once it is passed, nothing can be changed. Once the government offices or UN bureaus have received their annual allotment, they cannot ask for more. They can only petition for next year. I think that this is the key to the power of fate. It is like this year’s budget. 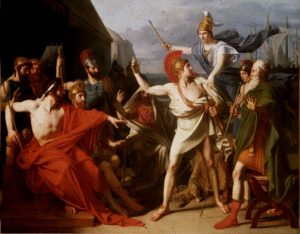 Consider how deeply the anxiety about this problem goes in the Iliad; it is in fact expressed in the opening conflict between Achilles and Agamemnon, which is essentially a problem of re-allotment once the division has already been made. The case is doubly poignant and humanly challenging because the commodity in question is a woman. Apart from the question about the value of a woman (how many hecatombs is she worth?) it is not possible to return a woman. She has become ‘used’, to put it crudely. It is essential, in regard to the possibility of reconciliation with Achilles, that Agamemnon claims he has not, in fact, slept with Briseis… although this stretches credibility.
The whole narrative problem of the Iliad, which is also Zeus’s problem, is how to stitch in a certain sequence of events, within a framework that has already been determined. He already knows that Troy is going to fall and when it is going to fall. But Thetis has called in a favour; and he must deliver in such a way as to work within the confines of a fate that has already been budgeted. To some extent, I believe he makes things up as he goes along. He is shown doing this when he wonders whether Patroclus should die right there at Hector’s hands, over Sarpedon’s body, or whether he should get to rage on some more. (He decides on a little more action for Patroclus.) 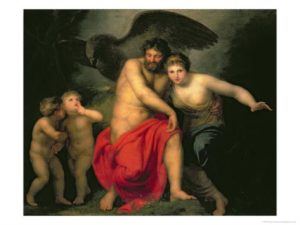 Zeus and Hera on Mount Ida, 1775 by Andries Lens

The flexibility here is striking. In Book VIII we find out from Zeus’s own mouth, for the first time, that Patroclus has to die as part of this favour for Thetis. Just because Zeus expresses it as a fated thing, does not mean that he had ever seen this before: he speaks in the modus of a prophet. But Zeus himself, the supremo, does not know precisely when the necessary death must occur. Similarly, in Book XV, when he wakes up from Hera’s embrace, he announces for the first time, to us and presumably to himself, that Hector also must die. His son Sarpedon will fall at Patroclus’ hands, and Patroclus at Hector’s, so that Achilles will finally be roused from the ships to seek revenge. This is the way that Thetis’ favour will be completed. There will be a reversal, a παλίωξις, driving back from the ships to Ilium, to neutralize the retrogression in fate that was initiated by Thetis’ request.
It is false to the letter and to the spirit of the story to say that Patroclus’ and Hector’s deaths were fated from the beginning. No such things were on the horizon until the quarrel of Achilles and Agamemnon, and Thetis’ visit to the knee of Zeus. Fate unfolds before us, at the very moments that Zeus sees the pieces fall into place, and Homer himself glimpses at the horizons of his story. Perhaps we even feel a sense of achievement here. Zeus’ successful negotiation within the confines of fate is at the same time a narrative achievement. As we are also swept onward into the real-time mortality of Patroclus and Hector, the pathos of Achilles’ surrogates.
At certain moments Zeus holds up the scales, and a man’s fate tips in the balance. I am open to suggestions about the meaning of this, but it strikes me as a ratification rather than a decision. Judges do not like to feel like perpetrators of any kind, but as agents of justice. Zeus is no exception. Holding up the scales is a way of turning the messy motives that produce what is fated, into a matter of masses and weights. There is a distance in the gesture that perhaps is a comfort to judge and jury. It seems to be a way of objectifying a decision, rather than an event in itself. 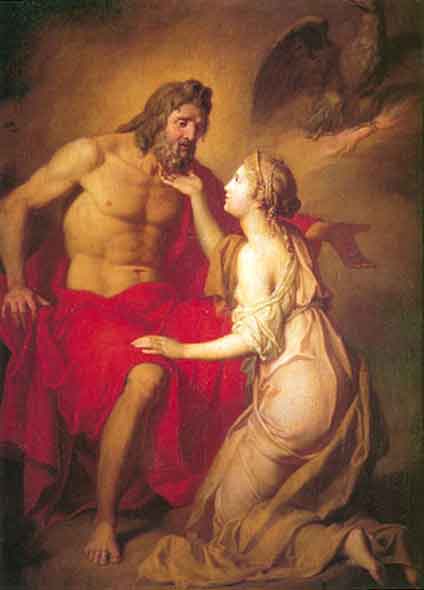 So, is the most powerful figure in the universe a kind of hen-pecked American president, with Hillary in the wings, and Monica asking favours, who has to pass a budget through an unruly congress and then live with the consequences? Yes. I think this is Homer’s idea. What I don’t understand is what experience Homer could possibly have had of this post-Enlightenment kind of government: for that is what Homer depicts in his Olympians, a government, of a kind very familiar to us.
The question to ask is about the truth and the reality. Which of the competing stories that purport to take us ‘behind the scenes’ actually works, so as to answer to our experience of reality? Is what is behind the appearance of our will and agency a reality of impersonal forces, masses, energies and elements, whose implacable laws are the true determinants of what is real? Or behind the scenes is there a purpose or intelligence of some kind? Or is there a loving god with a personal stake in our welfare? Or rather, does the world actually work as though its strongest power were a compromised president, where things happen as though they had been decided by a corruptible parliament, and the divinity of sex can overthrow the most stable fantasies of well-meaning people? It would be good to separate these answers, between the ones that are wishes, the ones that comfort, and the ones that are true. As always, open eyes and an open mind are what move us forward.