The Fall of Jerusalem (Part 2)

It was not often said of the Romans that they were an empire tolerant of seditious behaviour.
Though arguments can be made that they often bestowed certain benefits on the peoples they subjugated (a certain well-known scene from Monty Python’s Life of Brian springs to mind), once a nation lost its statehood and became a Roman territory, acts of physical dissent were not taken, in any sense, as constructive criticism.
Thus, when the people of Judea rose up to initiate the First Jewish-Roman War (66-73AD), the Latin overlords neither ‘umm-ed’ nor ‘ahh-ed’ about the course to take next. The responsibility for putting the Jews back in their place, and reinforcing that said place now belonged not to them, but to Rome, fell to the legate of Syria, Cestius Gallus.
A Surprising Defeat 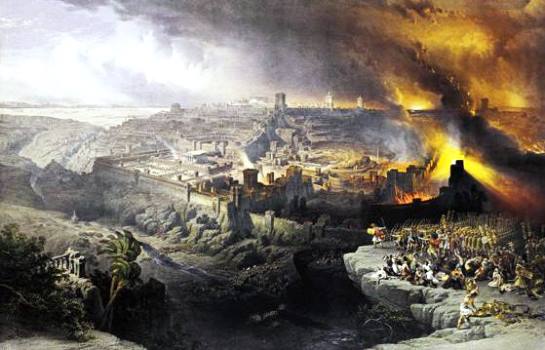 Whether through incompetence or an underestimation of the foe, and despite some initial gains, Gallus was soon humbled at the Battle of Beth Horon—at which he not only lost 6000 men, but the very symbol of Roman imperium, the legion’s eagle!
For the Jews, this great victory was a recruiting tool no amount of Roman repression could equal; there was now belief that the interlopers in their land could not merely be resisted, but defeated.
“It’s difficult to overstate how important the eagle was to a legion. For example, the ones lost at the Battle of Teutoburg Forest (9AD) were passionately sought after, the last taking 32 years to recover!”
The Romans soon realized that this conflict was not going to be won simply because the enemy were overawed by their shiny breastplates and neat formations, this was a fight that needed to be taken seriously. In true Hollywood style, the floundering Emperor Nero turned to a legendary commander, one currently in the political wilderness (having previously been booted off the ‘force’ (possibly for falling asleep during one of Nero’s theatrical recitals)), but who was now called back for one last job because, damn it, he was the best.
This was how Vespasian, together with his son Titus and 60,000 troops, began systematically breaking the Jewish resistance in town after town across Judea. The wily old soldier knew that, as long as he was making headway, as long as cities were falling and Jews were dying, there was no need to engage the bastion of Jerusalem itself, but leave the rebels to stew and hear daily news of their comrades’ deaths or enslavements.
A Nation Divided
Another, unforeseen, advantage for the Romans was that the radicals they failed to kill in the outlying towns fled to, and took refuge in, Jerusalem. And, as is so often the case when schisms abound, vicious infighting broke out. There resulted, therefore, a bizarre situation wherein the hardliner Jewish forces (the Zealots) were besieged inside the Temple by the more moderate faction, themselves inside the city walls. A separate, but equally radical group (the Edomites) came to relieve their fellow extremists who managed to sneak out of the Temple and unbar the gates during a thunderstorm, thus admitting their remorseless comrades. 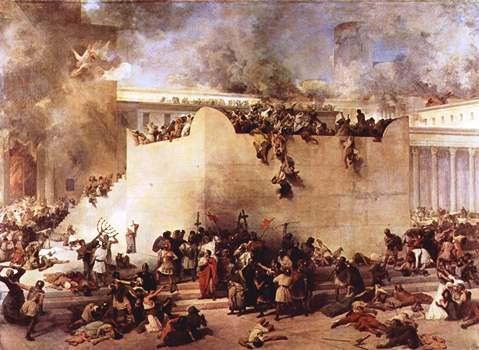 The Fall of Jerusalem, depicted on the Arch of Titus
Once inside, the Romans were merciless. The city was ransacked and burned. The surviving population was enslaved. The Second Temple was looted and destroyed.
Though it took another three years to seek out and destroy the last of the Judean resistance, the fall of Jerusalem was the de facto point at which Roman victory was assured.
Josephus tells us that over a million civilians died during the great siege with another hundred-odd thousand sold into slavery. Though such contemporary accounts are usually considered to be inflated, if the reality was only a fraction of this, then it must still have been one of the most horrific and bloody episodes in antiquity.
The importance of the event in the history of their respective civilizations was lost on neither the Romans nor the Jews. The former celebrated the campaign both on official coins and on the—still standing—Arch of Titus, whilst Jews today still recall the destruction of the Second temple on their annual day of mournful reflection, Tisha B’Av.