The Ancient City of Palmyra

“When are you going to write about Palmyra?” a reader asks me the other day. “If you’re willing to address the Elgin Marbles and political correctness, why not Palmyra?”
Why not, indeed?
First, we would like to thank you readers who send us all manner of encouragements, questions, and, sometimes, angry tirades.
Your editor reads them all, but we can’t respond to every one. Still, we get plenty of ideas, new topics of conversation spring to mind.
Our job here at Classical Wisdom Weekly is to connect the dots between the ancient and modern world, to give context to the curious subject of human history. In short, we try to facilitate the “Great Conversation”.
Today, we are going to try to do just that.
But some of you might still be scratching your heads. ‘What in the heck is a Palmyra? Is it a palm tree?’ I hear you say. If this sounds like you, then allow me refresh your memory.
The name sounds familiar because you undoubtedly heard it late last year on the 24-hour news cycle. Palmyra is an ancient city in the Syrian dessert, about 100 miles north of Damascus, which was snatched up by ISIS in late 2015. The group then destroyed culturally significant temples dating back to the age of the Roman Empire. The ancient amphitheater at Palmyra subsequently became the setting for a number of public beheadings.
It was just about the most horrible story your could have heard on the news, but we won’t spend too much undue time on that insanity. Rather, today we will look at the history of Palmyra; perhaps give you some context on that historically significant city that was defiled.
So…What’s a Palmyra?
An island out of the sandy ocean
Palmyra was, in the words of the historian Edward Gibbon, “… a cultivated spot in the barren desert of Arabia that rose like an island out of the sandy ocean.”
The city’s history goes back as far as 3000 BC, but it remained a minor way station in the desert until about the 1st century AD when the Roman emperor Trajan rerouted part of the Silk Road through Palmyra. The caravan traffic proved a boon to the city and it became a major destination that straddled the empire of Rome and the decaying Parthian Empire. 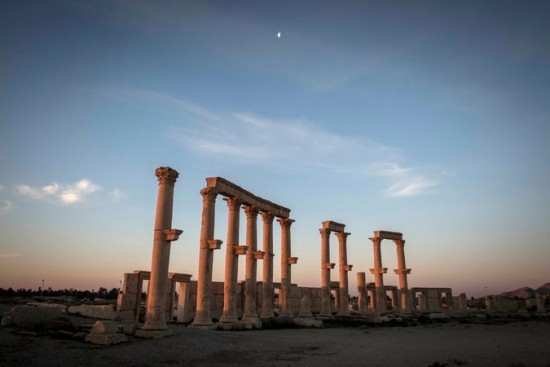 Ruins of Palmyra
Palmyra enjoyed political autonomy after a visit from Emperor Hadrian in 129 AD. It was a Roman colony, but still maintained its neutrality. For about 150 years the city grew and thrived by taxing the caravans along the Silk Road. This was the time period when most of the classically inspired temples were constructed, the very ones that were destroyed by ISIS last year.
However, while Palmyra enjoyed rapid growth, the Roman Empire was thrown into a state of disarray during the 3rd century AD. Numerous barbarian invasions had created instability within the political epicenter of the Roman Empire. Constant civil wars and chaos ensued. Between 235 and 253, 11 different men sat on the throne of the Empire.
Palmyra was left unattended in the East to confront a new threat. Out of the decaying Parthian empire their had come the Sasanian Empire, which invaded the Roman East in 253 AD.
Palmyra likely viewed autonomy under Rome as being preferable to subjugation to the Sassanians. The Palmyrene leader, Odenathus, assembled a defense force and successfully defeated the Sassanians, ending their invasion.
The Romans so admired Odenathus, that they effectively named him ruler of the East.
The Palmyrenian Empire
While Odenathus managed to hold off the Sassanians for several years after, he was killed by a disgruntled relative in about 268 AD. His wife, Queen Zenobia, took the reigns of the Palmyrenian army. Zenobia had grander ambitions for her city.
Ancient sources tell us that Zenobia began creating a Palmyrenian backed political coalition that extended far into Asia-Minor. She garnered the support of many important cities in the Eastern Roman provinces. While the queen was always careful to acknowledge fealty to Rome, it became clear that she was intent on establishing her own empire situated between the Greek and Persian lands. 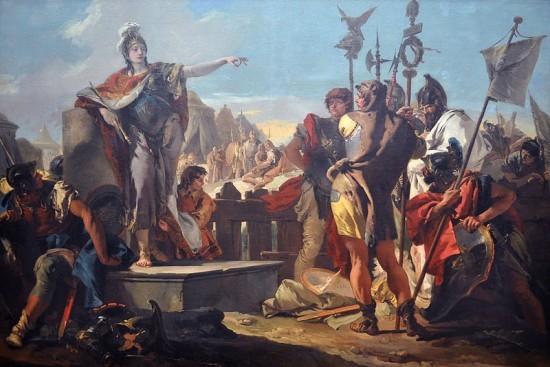 Queen Zenobia, by Giovanni Battista Tiepolo
In 270, Zenobia made her boldest move yet. She ordered her armies to occupy Egypt. The Roman legionaries were still preoccupied with barbarian invaders. The idea was that Rome would not have the resources to rebuke such an effort.
Unfortunately for the queen, she made her move right as Aurelian, one of the most formidable Roman Emperors of the 3rd century, took his seat at the head of the Roman table.
Aurelian marched east, hoping to put an end to the budding Palmyrenian Empire. By the time he reached modern-day Syria, Queen Zenobia had been forced to retreat to her hometown. She barricaded herself within Palmyra. Zenobia attempted to escape to the Sasanian Empire, the very nation that her husband had fought against. However, she was captured by Roman cavalry and brought to Emperor Aurelian.
What became of Zenobia is a matter of some debate. The Byzantine chronicler, John Zonaras claims that Zenobia returned to Rome where she was paraded through the streets in gold chains. It is said that she was then permitted to live out the rest of her days in Rome in luxury and leisure. 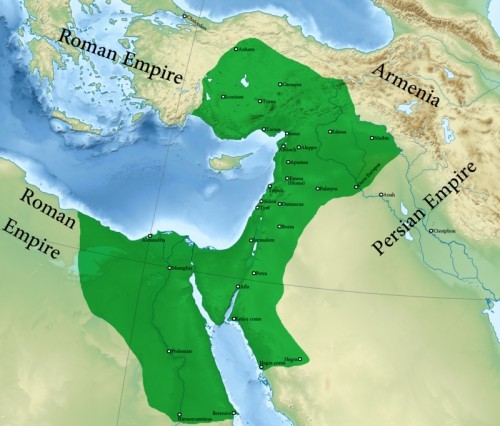 The Empire of Palmyra lasted from 270 to 273 AD
(Wikimedia Commons)
What we do know is that the city of Palmyra was not so fortunate. After the defeat of their Queen, the leaders of Palmyra attempted to incite a second revolt. Emperor Aurelian caught wind of the plan and returned to Palmyra with haste. He crushed the insurrection.
As punishment, Aurelian ordered the city to be razed. He left only the temples, and a handful of other buildings undamaged. Interestingly, this is the reason why there remain only temples at Palmyra for ISIS to destroy.
Rome diverted trade away from Palmyra in the ensuing years and the city, once again, drifted into obscurity.
No happy endings in history
So there you have it dear reader, an, admittedly brief, story of the history of Palmyra. Perhaps with this historical context fresh in your mind, the atrocities committed at this ancient site have become all the more unbearable.
History rarely has “happy endings”, but this one certainly has had a notable uptick in recent weeks. Palmyra is once again in the news, but this time its not because it is the victim of senseless destruction. Syrian and Russian forces took back the city recently. Last Thursday, the Russian conductor Valery Gergiev conducted a concert in the ruins of Palmyra.
You can read more about that here.
Now, we won’t get into the politics of all that. I’ll allow you to draw your own conclusions. For now, let’s part on happy terms. Enjoy your weekend, and we will speak again soon.
Facebook