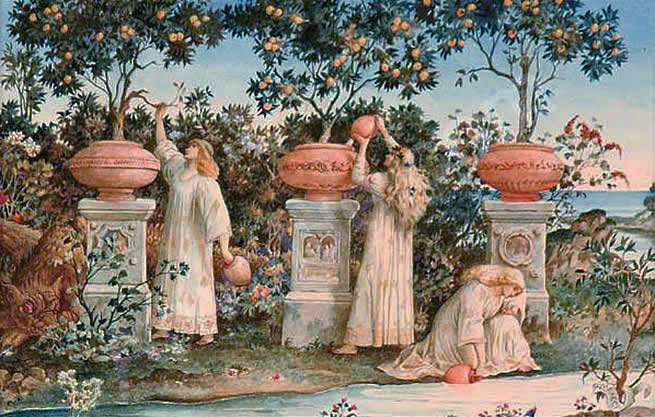 Flowers and Plants in Greek Mythology

When Persephone was kidnapped by Hades, the god of the underworld, her mother Demeter was stricken with grief. Demeter was the goddess of the harvest and fertile soil. She was filled with such sorrow at her daughter’s abduction that she deprived the Earth of all of her energy. 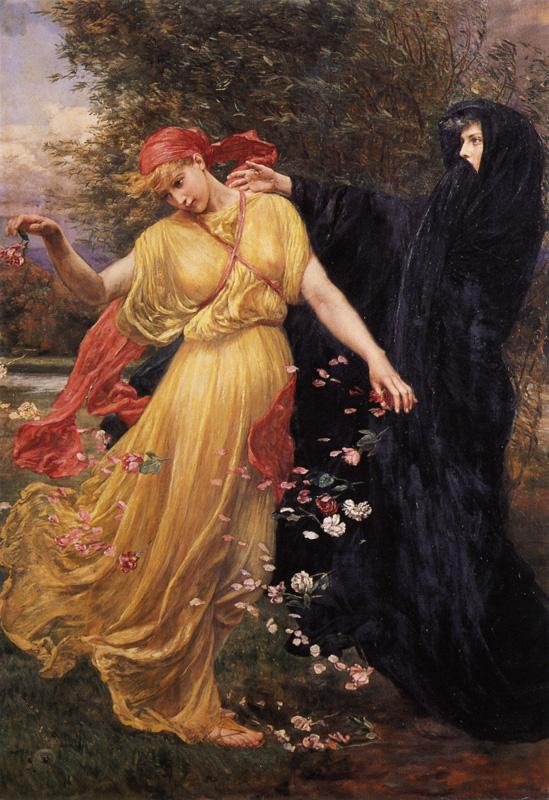 At the First Touch of Winter, Summer Fades Away by Valentine Cameron Prinsep, 1897

Fearing repercussions from the gods of Olympus, Hades negotiated Persephone’s release. Once someone consumes food of the dead, their essence can never truly leave the Underworld, so Hades convinced Persephone to eat six pomegranate seeds on her final day with him, to ensure that she would return to Hades for six months of the year.

The Abduction of Persephone is the personification of natural seasonal cycles and vegetation. Every year crops flourish in the warmer months and sink beneath the soil after the autumn harvest. Persephone was worshipped and honored alongside her mother Demeter as goddess of the Underworld and goddess of Spring and Nature.

The following are some of the most iconic flowers and plants that appear in mythology. The Greeks have a rich tradition of associating the gods with plants or flowers. Such associations generally derived from some physical feature of the plant, whether it be the form, complexity, healing properties or the blossom. 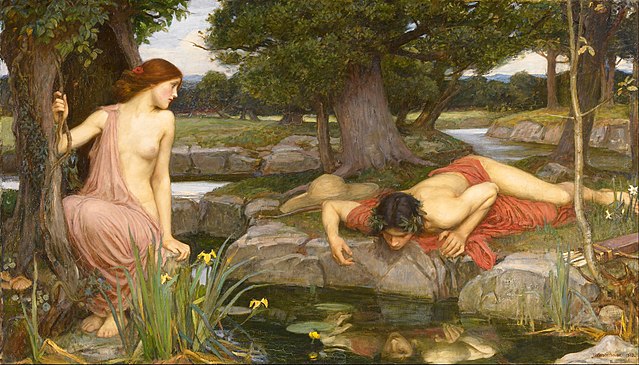 Narcissus, known for his beauty and self-obsession, met the beginning of his end when he rejected the goddess Echo. Heartbroken from the rejection, Echo roamed the forests and caves until there was nothing left of her but the sound of her voice (an echo).

To punish Narcissus, Nemesis, the Goddess of Revenge, lured him to a pond where he fell in love with his own reflection. Devastated by the unrequited love from his reflected form, Narcissus slipped into the pool and drowned. It is said that Daffodils follow Narcissus due to their tendency to grow along riverbanks and streams where Narcissus met his demise.

Hyacinths: The Story of Hyacinthus and Apollo 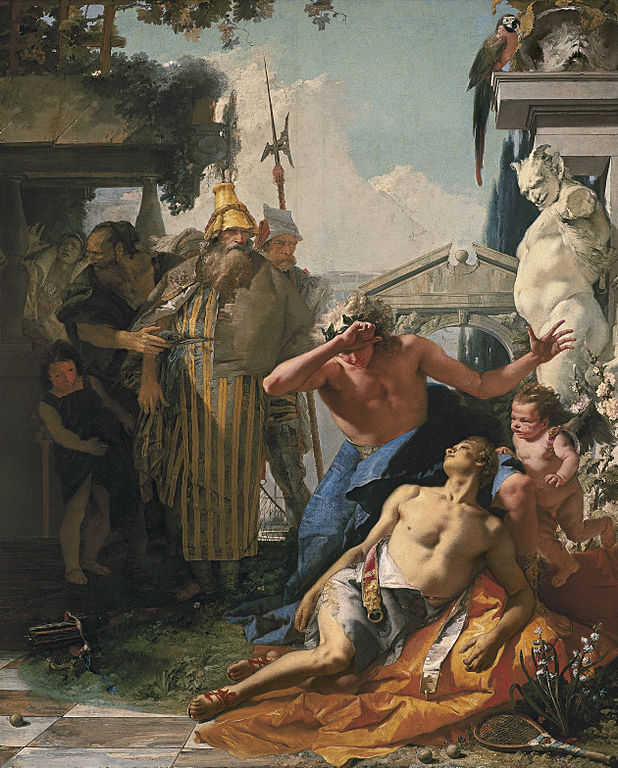 The Death of Hyacinthus by Giovanni Battista Tiepolo, 1752-1753

Hyacinthus was a popular and handsome Prince of Sparta admired by both mortals and the gods, especially by Zephyrus, god of the North wind.

Hyacinthus also caught the attention of Apollo, god of the Sun. Hyacinthus chose Apollo as his lover. Zephyrus became jealous of their closeness, and seized an opportunity to take his revenge by hitting Hyacinth on the head with a discus, killing him instantly.

Apollo was so grief-stricken he tried to stop Hades from taking Hyacinthus to the Underworld. However, once he realized his protests were in vain, Apollo created the Hyacinth flower from the blood of his dead lover, vowing that by so doing he would remember him always.

According to some legends the flowers then hardened into stone, and the Hyacinth stone is known in spiritual circles for its protective properties, and power to drive away melancholy.

The Garden of Hesperides by Ricciardo Meacci, 1894

To celebrate Hera’s betrothal to the god Zeus, Gaia, the Goddess of the Earth, gifted Hera a single apple tree, from which sprung Golden Apples.

Delighted with the gift, Hera requested that the Tree be planted in her orchard in The Garden of Hesperides near the Atlas Mountains.

The Hesperides (nymphs of the evening and golden sunsets) were given the task of tending the garden, but they stole some of the golden apples for themselves. Hera then placed an immortal hundred-headed dragon called Ladon to guard the orchard.

It is believed the ‘Golden Apples’ refer to oranges, which were unknown to Europeans until the Middle Ages. Even today “Hesperidoids” is the Greek botanical name for citrus fruits.

Mandrake: The Herb of Circe

Circe was an ancient Greek sorceress of myth with vast knowledge of potions and poisons. The daughter of Helios and the ocean nymph Perse, she resided on the island of Aeaea.

Circe is often associated with the Mandrake, a plant she commonly used to turn men into animals. She is best known in for her appearance in Homers Oddessey, where, on the way back from the Trojan War, Odysseus and his men took rest on Aeaea. Displeased with receiving uninvited visitors, Circe turned Odysseus’ men into pigs using the power of the Mandrake. 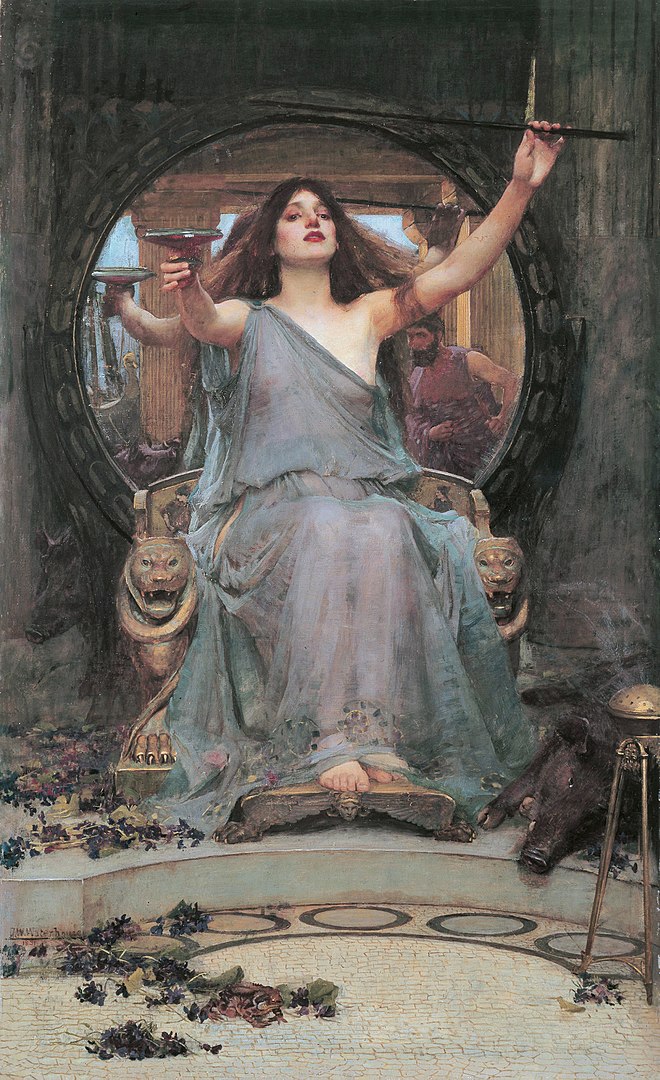 Circe Offering the Cup to Odysseus, by John William Waterhouse, 1891

Protected by the herb Moly, Odysseus rescues the men and became her lover. He and his men stayed with her on the island for one year before the men convinced Odysseus to resume the journey.

Mandrake was also considered a powerful aphrodisiac if delivered in the right doses, and was used in rituals in the Cult of Aphrodite. In ancient daily life, Mandrake was often prescribed to combat insomnia, and  used as an anesthetic for surgery.

While nothing is as it seems in Greek mythology, ancient knowledge of the power of plants is evident.

The personification of nature in the form of gods reflects their reliance on the natural world for survival and longevity. Natural medicine was consulted for all matters of body and spirit — even the effects that some plants have on human consciousness were well-known and often used. By associating plants with gods and using plants as medicine, the ancients may have felt that they were accessing something of divine power.

Various myths and even the names of the gods have survived through the representation of plant life and their strong associations with healing (or harmful) properties. These stories also demonstrate a deep understanding of natural cycles, and a desire to preserve this knowledge for future generations.