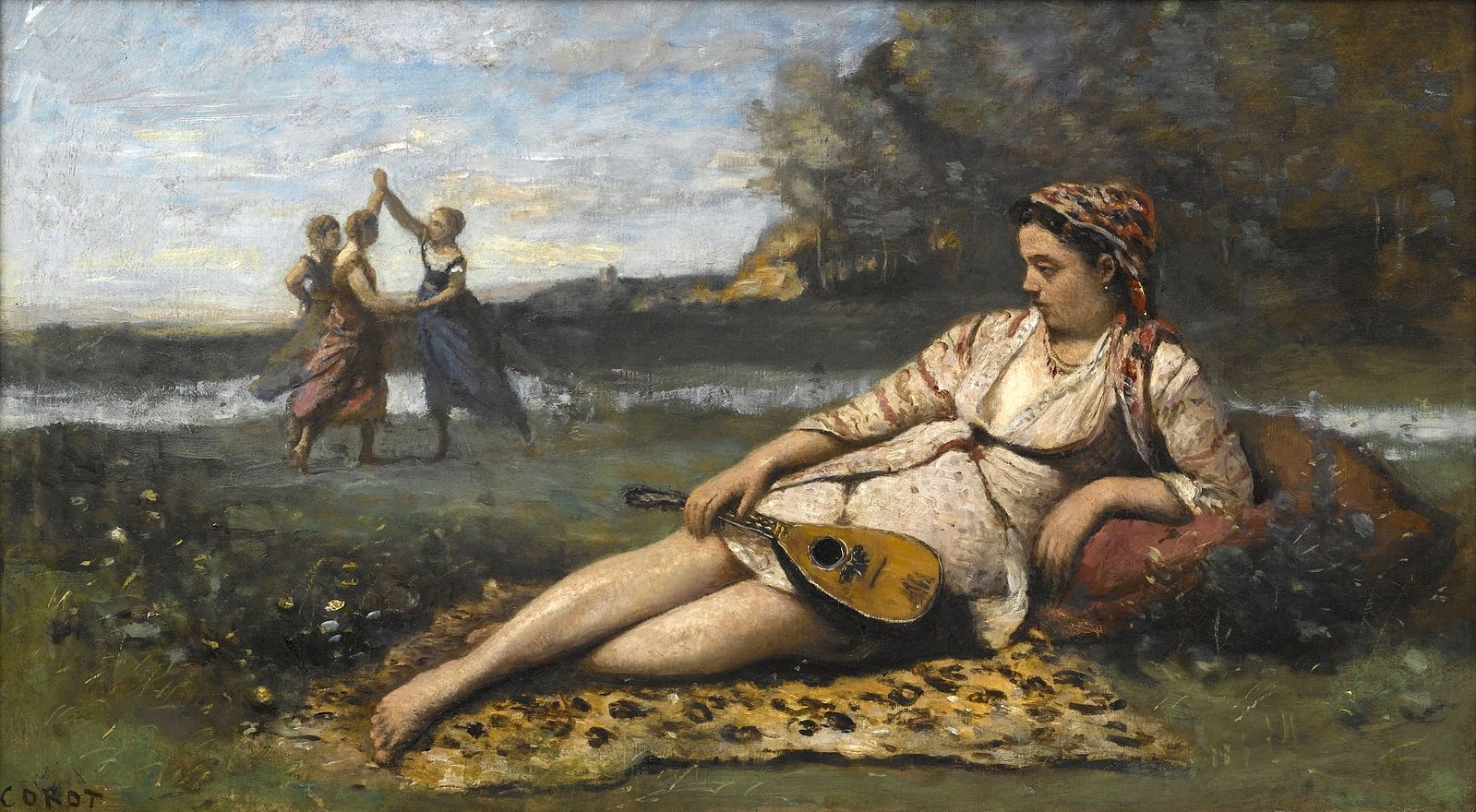 Written by Meghan McKenna, Contributing Writer, Classical Wisdom
Sparta, home of Ancient Greece’s most brutal warriors, trained from their youths to become capable hoplites. It is an image that has become a staple of our thoughts when thinking about how Spartan society may have been. But is this the case or is this a force-fed misconception due to centuries of misrepresentation? Was Spartan society as militarized as it is portrayed?
The Spartan Mirage
The first person to consider this and put it into writing was Francis Olliers in the 1930s. He discussed how certain philosophers may have set a precedent of a militaristic Sparta which continued to color opinion through the centuries.

Xenophon preferred the Spartan way of life and lived in Sparta for many years. Often, his praise of Spartan life is used to support the idea of Sparta as a heavily militaristic society, and his decision to live there gives credibility to this.
However, not all of Xenophon’s’ writing is considered when creating a picture of a militarised Sparta. In the Constitution of the Lacedaemonians, Xenophon writes an in-depth analysis of Spartan society, with the first thirteen chapters showing him praising the way Spartans raise their children, Spartan egalitarianism, and their warrior mindset. 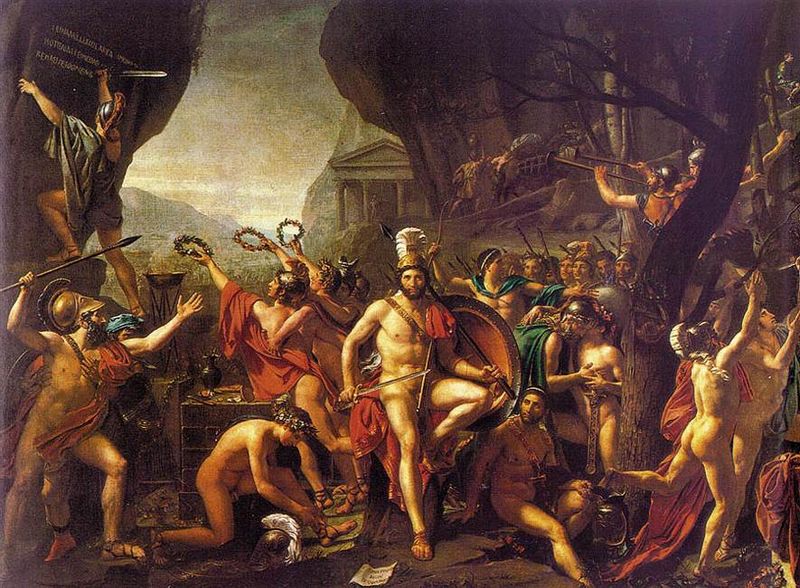 Leonidas at Thermopylae, by Jacques Louis David, 1814. This is a juxtaposition of various historical and legendary elements from the Battle of Thermopylae.

In his final chapters, Xenophon flips his view, explaining that everything that had made Sparta a great city-state was disappearing, as the state became corrupt and no longer followed the laws set by Lycurgus. He further discusses how there was a decrease in morals and prestige, which made other city-states suspicious and cautious of Sparta gaining more power and taking control of Greece.

Herodotus also contributed to the mirage, as his writing can be quite hyperbolic. For example, Herodotus gives historians a notion of the size of Sparta’s population, while also pushing the idea of military supremacy. At one point he describes Sparta as a city of about eight thousand men, “all of them equal to those who have fought [at Thermopylae].”

Plutarch also perpetuates the Spartan mirage, as he writes based on the oral history of Sparta 500 years after its prime. It was Plutarch’s writings that created the famous Spartan phrase, with your shield or on it. 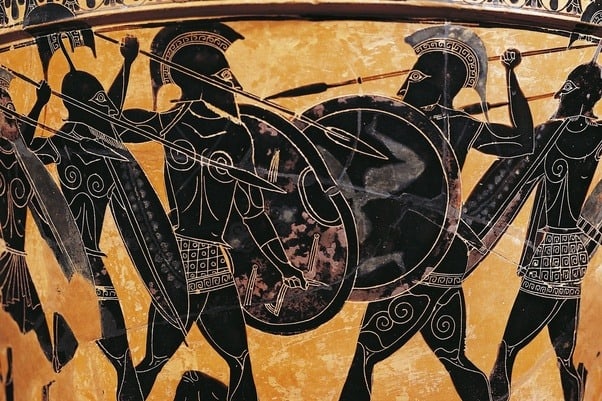 Davies suggests that Plutarch’s writings are idealized, and states that even though Plutarch may have visited Sparta, it wouldn’t have resembled classical Sparta, as it had become “a tourist attraction which made a superficial claim to continuity with its glorious forebear.”
The way in which these classical writers contributed to the mirage is the most important explanation of how the image of a Spartan warrior state has become so widely accepted, not only in our own society, with movies such as 300, but also in other societies due to a snowball effect that began in Ancient Greece itself.
Agōgē
The agōgē is a unique part of Spartan society and was believed to be an education system. Boys would start at the age of seven, teaching them obedience and endurance. Xenophon explains that the staff, known as Mastigophoroi, would carry whips and the boys would wear the same shoes and clothes all year round and would be forced to train on little food, to encourage year-round endurance of the elements and the ability to continue when no food is available. 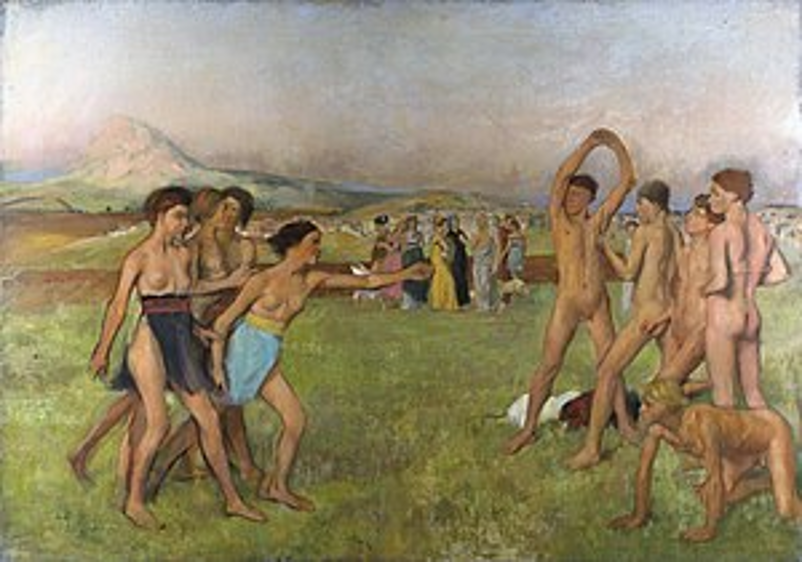 Many people would take this and instantly connect it to war. However, there is very little in Xenophon’s writing which actually points towards it being a military institution. Jean Ducat suggests that the agōgē may be overemphasized by historians due to its sensational nature and the fact that there is nothing similar to it in other poleis.
But surely military training from a young age would be both sensational and unusual, so why is it missing from other contemporary accounts?
Xenophon later discusses the Spartan formation in the army claiming that it is very easy to follow. Therefore, boys may not even need to have military training, and it is more beneficial to train them to be more formidable and steadfast, which would also come into practice during a harsh winter.
Hodkinson argues that we can make sense of the Spartan education system by putting the upbringing the Spartiate boys had into perspective. As his example, he states: “its commencement at age 7 and its division into three general stages—the paides (age 7–c.13), paidiskoi (age c.14–19) and hēbōntes (age 20–29)—parallels the less formalized stages of boyhood, youth, and young manhood in other poleis.” 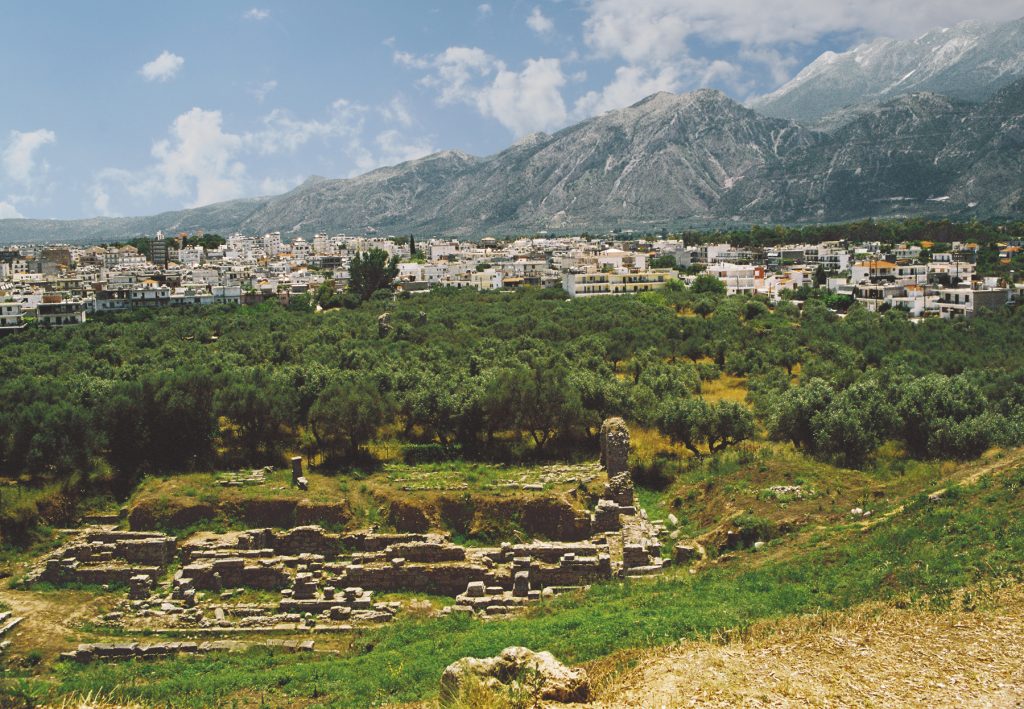 Ruins of Sparta from the right bank of the Eurotas. Sparti, Peloponnese, Greece.

Jean Ducat also argues that it is likely that boys had a normal upbringing with private tutors. However, this is not focused on by the ancient writers, as the agōgē is “the most sensational part, certainly … but not necessarily the most important.” So it seems that the agōgē was a highly disciplined education system overseeing a boy’s stages to manhood, rather than a highly militarized training establishment.
Structure
Sparta was run with an oligarchical government who had put in place a rigidly hierarchical societal system, which depended on the smooth operation of various state functions and infrastructure. Spartan society would have likely had a plethora of administrative positions entrusted solely to Spartiates, meaning there would have been plenty of nonmilitary jobs and responsibilities available, suggesting that there was more to Sparta than her military.
Although all men were expected to be a part of the military, at the age of thirty adult men were no longer active members. Moreover, many of them would have been injured in wars and no longer have been able to conduct military service. Are we to think that these men did nothing during their time away from the military? 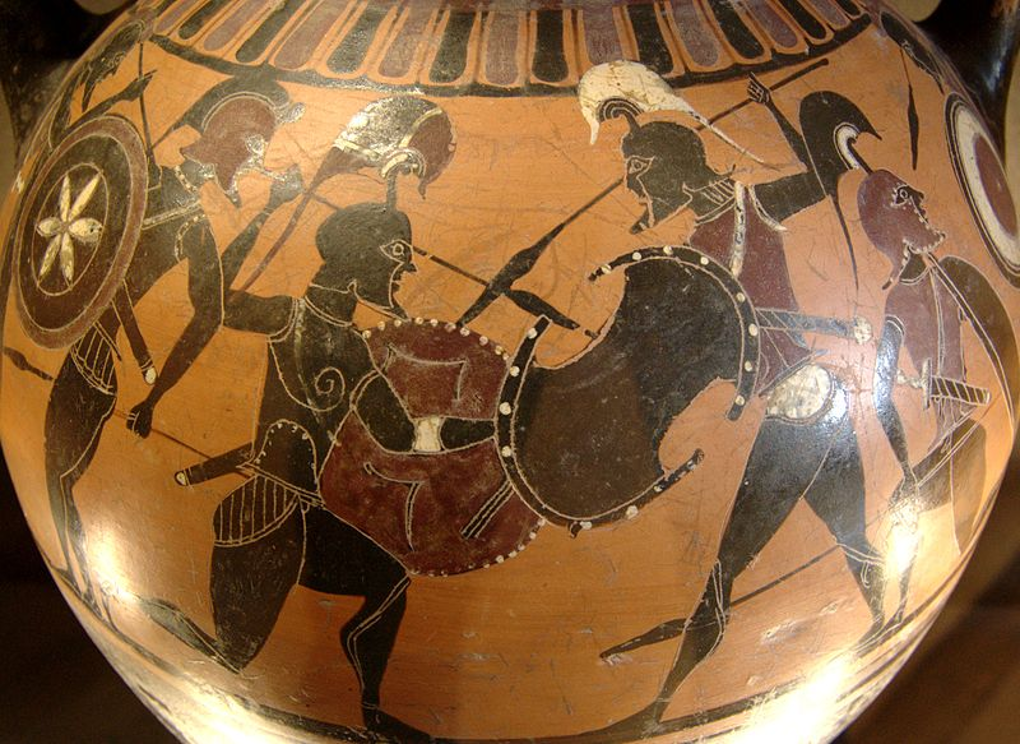 Well, we would be wrong…
All families in Sparta had a kleros, an estate that financially supported their family financially, with helots working the land. Managing the kleros and the accounts were the man’s responsibility. The household would receive barley from the government each year, and the man was expected to pay syssitia fees.
There was a system in place to receive and acknowledge these payments, which employed Spartiate men who were either too old to campaign or injured. Once again, we see that there were roles in Spartan society that were nonmilitarized.
Military practices
As previously mentioned, Xenophon discussed the seemingly difficult maneuvers conducted by the Spartan army during battle as being “so easy to understand that no one… can possibly go wrong.” He also mentioned that the men are led by “second lieutenants” who verbally give out orders—orders that other poleis do not give.
Though it is often thought that the Spartan military was highly trained and militarised, in reality, they just employed tactics that were not complicated and worked being given by lieutenants who could control large groups of men. 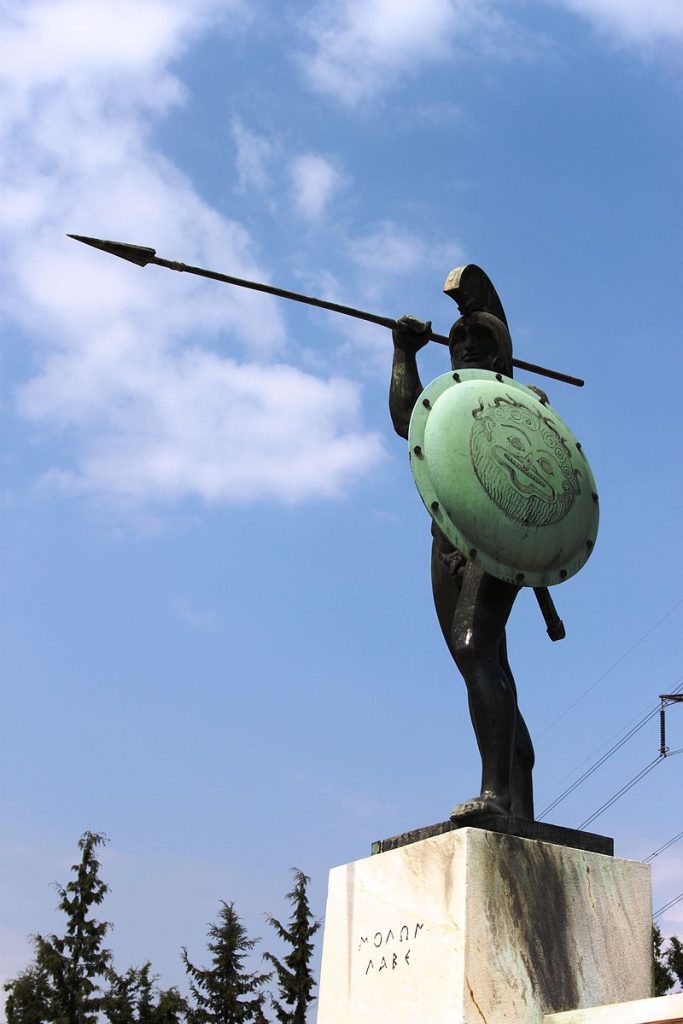 On the monument to the Battle of Thermopylae, Leonidas.

If we consider Sparta in comparison to other city-states or countries at the time, its military isn’t very impressive in size. In terms of size, Athens’ military consisted of hoplites totaling 13,000 and its fleet consisted of 300 ships, while Sparta had no navy and approximately half as many hoplites.
Moreover, if we look at the Persian army led by Xerxes, Herodotus describes the army as being made up of over two million fighting men. This is, of course, a hugely overestimated figure, and historians such as Burn suggest that, with the amount of water supply available, the land around Thermopylae could support an army of at least 200,000 men led by Xerxes. But from what Herodotus says we can infer that no matter the actual figure of the army, it vastly outnumbered any Greek army—especially the Spartans.
Warriors, but not a Warrior-State
When you put it in this perspective, it is clear that Sparta’s army was not the most impressive. It certainly goes against the portrayal of Sparta as a highly militarized society to find that they had such a small army and lacked naval warfare capabilities. 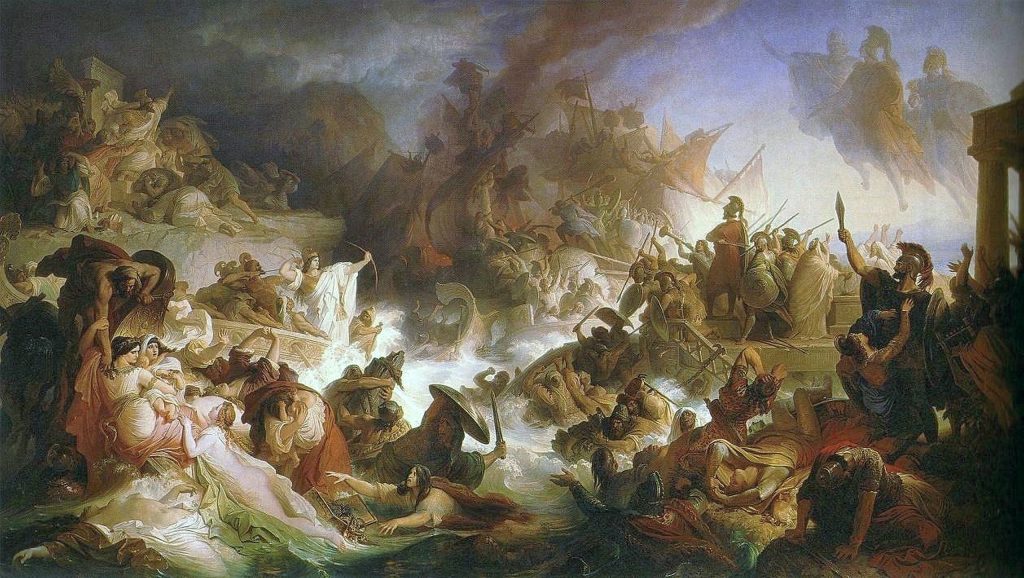 The extent to which Sparta was militarized is still hotly debated. There is no doubt that a large part of Spartan society was dedicated to military service and training, but there is evidence to show that it was certainly not their only focus.
With that in mind, perhaps it is time for us to rethink the way we portray this ancient city-state… but that doesn’t mean I won’t be watching 300 anymore.
Resources:
Facebook