The rise and fall of the Delian League

By Mónica Correa, Contributing Writer, Classical Wisdom
The Delian League, or Confederacy of Delos, was the name used for the confederation of Greek states under the ‘leadership’ of Athens. According to some records, it lasted from the end of the Persian War, circa 478 BC, until the end of the Peloponnesian War in the year 404 BC.
As described in the statutes, power was originally distributed equally. Indeed, according to Thucydides, each state in the league had an equal vote . However from the beginning, the ‘unofficial’ leader of the Delian League was Athens.

Fragment of the Athenian Decree concerning the issue of tribute

The original headquarters were at Delos, but they were later moved to Athens…a transition that meant more than just a change of location.
Purpose and splendor
The Delian League started as a military alliance against Persia. Around 200 city-states, including Eretria, Mykonos, Athos and Byzantium, joined the alliance by the mid-fifth century BC for the same reason. They wanted protection by the Athenians, who controlled the naval yards, thus turning them into the only ones who could fight against Persia.
Some say that the Athenian politician and military man, Themistocles, is the real father of the Delian League, because it was under his reign that the development of the Athenian navy made the League possible. 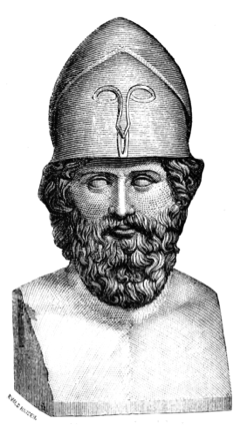 Historians such as the aforementioned Thucydides kept record of the actions taken by the Delian League; some of them are expressed in their constitution:

• It was decided which cities were to provide money and which were to provide ships
• The first payment (tribute) was 460 talents (today 57 lb.)
• Delos was to serve as treasury
• The assembly of the League met in the Temple at Delos

Over time some of these constitutional provisions changed and, perhaps not surprisingly, this led to other problems.
For instance, the League survived financially by tributes or taxes… and yet not all of this money stayed within the League. A considerable amount of the taxes paid by the members eventually flowed to Athens alone. Indeed, this ‘income’ allowed Pericles, a Greek statesman, orator and general of Athens, to start building the Parthenon on the Acropolis… and other major ‘public’ works.
It is at this time that we can see that the League was turning from an alliance to an empire. 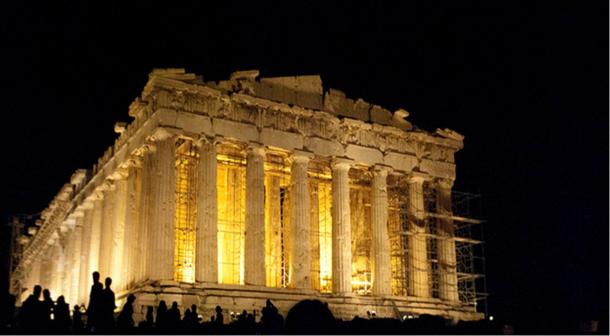 Internal wars
Unlike the Peloponnesian League, within the Delian League, wars between members were prohibited. In fact, the Athenians later kicked out some of their allies on the pretext that they carried on wars against each other.
Naxos, the first member who tried to leave the League, stopped paying tribute so they were considered as enemies to Athens and the alliance. They were subsequently attacked by Athens and forced to remain as members. 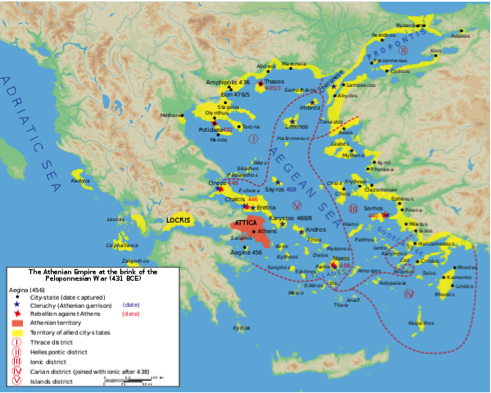 To turn away from the Delian League meant to turn towards the side of the Persians. Nethertheless, some city-states allied with the Persians in the early fifth century BC, during the Persian Invasion.
The way Athens handled the revolts led to the independence of city-states who stopped sending their men, money and ships to Athens.
The beginning of the end
After 30 years of reign, the main accomplishment of the Delian League was the Peace of Callias, named after Callias II, an ancient Greek politician. It was a treaty established around 449 BC between the Delian League and Persia that ended the Greco-Persian Wars.
After this, one may be forgiven in thinking that the League should disolve… however, this did not happen. Instead, the Athenian Empire (454-404 BC) started its reign by moving the treasury of the Delian League from Delos to Athens.
For the Second Athenian Confederacy (378-7 BC), a revival of the Delian League, the enemy was Sparta. It was created as a protection against Spartan aggression. It was a maritime self-defense league led by Athens. The Delian League was finally broken up by the capture of Athens by Sparta in 404 BC.
Even today for some historians, it is not clear if becoming an empire was the original intention of Athens, or if it was an idea that developed as they gained the power and confidence of their allies. However, there’s no doubt that this empire led to many conquests for the occidental world.
Facebook

Posted in Economics - No comments