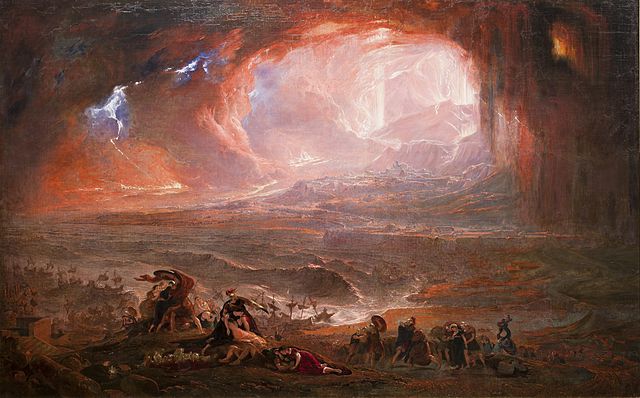 Volcanoes in the Ancient World: Cataclysm and Change

Volcanic eruptions have had a devastating impact on pre-industrial societies such as the ancient Greeks and Romans. Volcanoes have in fact changed history. Some of the most important eruptions in the history of the Classical world are discussed below.

Theran Eruption and the End of Minoan Civilization

Bronze Age Minoan Civilization from the Aegean Island of Crete is generally considered the forerunner of ancient Greek culture. This culture suddenly disappeared before the Trojan War (c 1200 BC).  At about this date, a volcano exploded on the Aegean Island of Thera (modern-day Santorini), destroying the town of Akrotiri. It is believed that the force of the volcano caused a tsunami that devastated the island of Crete, located some 75 miles south of Akrotiri. Some believe this to be the source of the myth of Atlantis. The ash from the volcano caused what is known as a ‘cold wave’ that produced widespread crop failure and probably famine. Since the Minoans were dependent on agriculture, their society was suddenly very weakened, allowing the Mycenean Greeks to invade and conquer their Island.

Destruction of Pompeii and Herculaneum, by John Martin

In 79 AD. the area around the Bay of Naples in Italy was a flourishing with prosperous towns such as Pompeii, Herculaneum, and others. However, with the eruption of Vesuvius, a cataclysm descended on the region. Vesuvius sent pumice and lava into the air. A flow of magma and hot ash flowed down its slope at a rapid speed. The town of Pompeii went dark because the ash blotted out the sun as a tide of lava swept into their homes and streets. Some were able to flee on boats in the harbor, but many were killed. It is estimated that some 2,000 people died in Pompeii and its surrounding areas. Many of the dead were encased with hot ash, preserving them for almost two millennia. Pompeii was abandoned because of the thick ash that had engulfed it and was forgotten for almost 1700 years.

Researchers now better understand the link between volcanic eruptions in places such as Alaska, the Arctic and modern Indonesia and war, famine and unrest in Ptolemaic Egypt. For example, in 245 B.C Ptolemy III had himself crowned King of Asia after capturing Babylon, but his dreams of conquest were ended by uprisings. A mysterious volcanic eruption caused him to return to Egypt to quell a major revolt caused by famine. In 205 BC another volcano erupted, causing more famine, starvation and uprisings. The years of Cleopatra’s reign were marked by famines and plagues that were likely the result of some volcanic eruption, possibly in Alaska. Volcanoes greatly contributed to the decline of Ptolemaic Egypt and its eventual conquest by Rome.

The Fall of the Roman Republic

“Destruction” from The Course of Empire Series by Thomas Cole

By the mid-first century BC, the Roman Republic was in crisis, wracked by political instability and rebellious generals. In 43 B.C. the Okmok volcano, located on the Aleutian Islands just off Alaska, erupted. This cooled the global temperature, resulting in poor harvests that may have contributed to the instability in the Roman Republic. Food shortages led to rioting in Rome and other cities in Italy. This instability made an authoritarian government more appealing, likely accelerating the decline of the Republic and the rise of Octavian who became Augustus, the First Roman Emperor.

For the first two hundred years of the Roman Empire, volcanic activity was limited. This may have contributed to the stability and the prosperity of the era. There was no unexpected droughts or sudden drops in temperature to disrupt agriculture. However, this changed during the Crisis of the Third Century—a period when the Roman Empire all but collapsed. The crisis period consisted of a series of emperors, civil wars, barbarian invasions, famines, and economic collapse. A recent study has shown that during the period, there was also widespread economic and social dislocation in Egypt. This was unexpected, as the province was believed to have escaped the worst of the Crisis. However, a volcano erupted in the Arctic in about 260 A.D, causing cataclysmic climate change in the whole region. The changes brought flooding and crop failure. Thus, it is now believed that volcanic activity played a role in the existential crisis faced by the Roman empire in the third century AD.

The End of the Classical World

Scene from The Fall of the Roman Empire (1964), directed by Anthony Mann © 1964 Paramount Pictures Corporation with Samuel Bronston Productions

There are many dates for the end of the Western Roman Empire. Today, many scholars believe that it occurred later than previously thought. Many have pointed out that Roman law, culture, society, and social organizations continued well into the sixth century AD. Indeed, at this time it appeared that Emperor Justinian might even be able to revive the empire. However, something else also occurred in the sixth century AD: the climate cooled, bring a decline in agriculture. This change may have contributed to the spread of diseases such as the plague.  The mid-sixth century AD has also been called the Late Antiquity Ice Age due to two massive volcanic eruptions. In 530 A.D, a volcano erupted in Iceland, causing temperatures to drop, crops to fail and famine, according to Byzantine and Irish chroniclers. Before the ancient world could recover, the eruption of the Ilopango volcano in El Salvador caused temperatures to plunge again, leading to renewed hunger and disease and even war. It appears that volcanic activity ensured that the Classical World would not revive, marking the beginning of the so-called Dark Ages.

Volcanoes caused cataclysmic events that resulted in large-scale destruction and loss of life in the ancient world. Eruptions have led to climatic changes that triggered agricultural losses which ultimately led to famine, plague and war. Even volcanoes located thousands of miles away had a devastating impact on ancient societies and their development. This can help explain important historical developments, such as the rise and fall of empires. Occasionally, these disasters may—as in the case of the Minoans—lead to the downfall of an entire civilization.