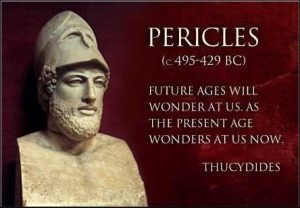 Pericles was an Athenian general and statesman who  rose to prominence during the golden age of Athens and would remain the most influential man in Athenian politics for several decades. He was instrumental during the first years of the Peloponnesian war and would be remembered for his contributions to the common citizens as well as his promotion of art and culture in ancient Athens.
Pericles was born to the Athenian politician Xanthippus. A shy boy for most of his childhood, he focused primarily on his studies. He was educated by some of the best teachers in all of Athens, and would later be known as the first politician to attribute great importance to the study of philosophy and of the arts.
He entered politics in his early thirties and quickly aligned himself with the Athenian politician, Themistocles. Pericles stood with Themistocles against his political opponent, Cimon; a man who was voraciously pursuing the ostracism of the legendary Athenian general. Cimon would achieve his victory and see that Themistocles was banished from Athens. In response to this, Pericles combated with Cimon in the political arena, and eventually had the man exiled by accusing him of siding with Athens rival city-state, Sparta.  Pericles was now the dominant political force in Athens.
During his time in Athenian politics, Pericles enacted much legislation that opened up the political system to the poor and unfortunate citizens of Athens. He allowed lower class citizens to attend theatrical performances for free, using city funds to pay for their admission. He also granted generous wages to any citizen who acted as jury for the Athenian Supreme Court. He encouraged all citizens to take part in the democratic process, which prompted several underprivileged candidates to run for public office.
Pericles began his military career during the first Peloponnesian war, leading much of the Athenian military leading to an unsucessful attempt to capture the city of Oeniadea on the Corinthian gulf. A 5 year truce was struck and Pericles returned to Athens. Strangely enough, Pericles’ political opponent Cimon returned from exile during this time and would help Pericles with several military engagements in the coming years.
Even though Pericles was a dominant political figure in Athens, he was still vulnerable to attack within the political structure. Several colleges of his were accused of embezzling funds and Pericles himself was accused of maladministration of the public funds. It has actually been suggested that Pericles actually sought to expand engagements during the Peloponnesian war as a means to escape political persecution at home.
The Peloponnesian war did progress with Pericles playing key roles in several military engagements. However he continued to be persecuted by his political opponents in Athens and actually was deprived of his generalship in 430 BCE. This didn’t last long, however and he was reinstated as a Stratego in 429 BCE. Unfortunately for Pericles his reinstatement occurred just as the plague of Athens had begun to ravage his citizens. Pericles, along with his two sons Paralus and Xanthippus, would fall ill from the plague and die in autumn of 429 BCE. The death of Pericles is often regarded as the end of an era for Athens. The city would very slowly decline in the coming years; it’s unique glory and grandeur would begin to fade.