Three Stoic Lessons from a Galaxy Far, Far Away

By Alex Barrientos, Associate Editor, Classical Wisdom Weekly
It is no secret, to those who are familiar with the saga, that Star Wars is filled with wisdom. Those not familiar with Star Wars are at least familiar with its iconography, such as the helmet of Darth Vader—that great symbol of the dark side of the force.
Some are also likely familiar with the little green Jedi master, Yoda (not to be confused with the cute little creature of the same species from the Mandalorian). Yoda is first introduced in The Empire Strikes Back, when Luke seeks him out on Dagobah to learn the ways of the Jedi. He appears again only briefly in The Return of the Jedi (but not without failing to impart some more wisdom), and is present throughout the prequel trilogy.
The great thing about being a reader of the Classics is that you can recognize almost immediately the Stoicism of Yoda’s teachings (one may also locate some Buddhist elements as well, though I think that is to be expected given the similarities between the two). He preaches against attachment, cautions against giving into fear, and speaks of the Force with the same reverence that the Stoics spoke of Nature, among other things. So, let us look at some of the Stoic lessons we can learn from Yoda.
1. Focus on the present

“Remember also that each man lives only the present moment:

The rest of time is either spent and gone, or is quite unknown.” 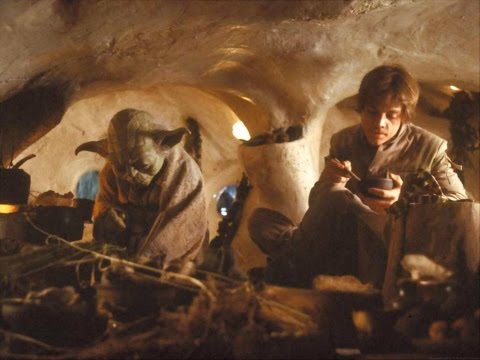 Luke and Yoda in Yoda’s hut on Dagobah, The Empire Strikes Back.

While on Dagobah, one of Yoda’s first teachings to Luke comes after recognizing Luke’s impatience and frustration. While speaking to the Force ghost of Obi-Wan Kenobi, hesitant about agreeing to train Luke, Yoda says:

This one a long time have I watched. All his life as he looked away. To the future, to the horizon. Never his mind on where he was, hmm? What he was doing. Hmph! Adventure. Heh. Excitement. Heh. A Jedi craves not these things. You are reckless!

Luke,  desperate to begin training as a Jedi, assures Yoda that he won’t fail him. Luke says, “I’m not afraid”, to which Yoda responds ominously, “You will be. You will be.”
Why will Luke be afraid?
Well, for one, Jedi training is no easy task. But more than that, Luke was not only being trained to be a Jedi, but to destroy the Sith. That meant confronting Darth Vader (Luke’s father, though he doesn’t know that yet). Luke’s lack of fear in the moment while he’s speaking to Yoda is unimportant; what will count is avoiding fear when confronting Vader.
Why is Yoda so certain Luke will be afraid?
Because Luke is always looking to the future and fails to keep his mind on the present. Fear arises from the uncertainty of the future. When getting ready for a job interview, for instance, it is easy to start creating worries in one’s mind: “What if I mess up? What if I start sweating too much? What if I stutter? What if I say the wrong thing?” Then the fear sets in, and you manifest the very thing you wanted to avoid. 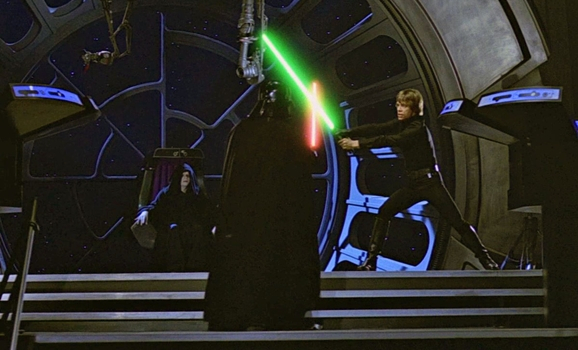 Luke fights Vader on the Death Star, Return of the Jedi.

Now, imagine instead that you’re facing the full power of the dark side of the Force (aren’t we all, in some sense)!? It is easy to see how one who dwells too much on the future will be much more readily open to fear in that situation, and so Yoda knows Luke must overcome his inability to focus on the present.
In fact, Yoda was not unfamiliar with the fact that someone could deny being afraid but eventually be consumed by fear. Luke’s father, as a little boy, standing before the Jedi council, had also responded to Yoda that he was not afraid. Anakin had just left his Mom on Tatooine, destined to become a Jedi Knight. While the council debates whether or not to train him, Yoda asks Anakin how he feels, to which he responds, “cold.” But the council presses further:

Ki-Adi-Mundi: Your thoughts dwell on your mother.
Anakin: I miss her.
Yoda: Mmm. Afraid to lose her, I think, mmm?
Anakin: What has that got to do with anything?
Yoda: Everything. Fear is the path to the dark side. Fear leads to anger. Anger leads to hate. Hate leads to suffering… I sense much fear in you.

Though Luke is eventually able to not let fear overcome him and to focus on the present, Anakin was not so lucky: the fear of losing the one he loved overcame him and he tragically ended up bringing about the very thing he was trying to prevent. 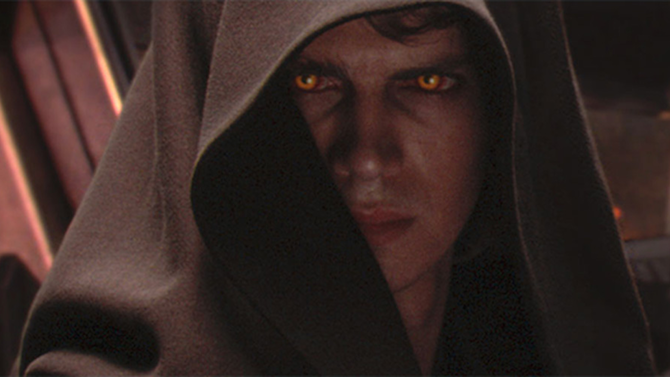 Anakin (Vader) goes to Mustafar to wipe out the Trade Federation, Revenge of the Sith.

2. Don’t fear death
In Revenge of the Sith, when he begins having nightmares of Padme dying in childbirth, Anakin is stricken with fear. Before Anakin’s mother died in Attack of the Clones, he had been plagued with nightmares of her death, nightmares that ended up coming true. So, these nightmares of Padme are especially worrying for him. After telling Padme about it, she says, “It was only a dream”, to which he responds, “I won’t let this one become real.”
Shortly after his talk with Padme, he visits Yoda in the Jedi Temple for advice. After telling Yoda of his visions, Yoda cautions him against giving into the fear his visions are producing:

Yoda: Careful you must be when sensing the future, Anakin. The fear of loss is a path to the dark side.
Anakin: I won’t let these visions come true, Master Yoda.
Yoda: Death is a natural part of life. Rejoice for those around you who transform into the force. Mourn them do not, miss them do not. Attachment leads to jealousy, the shadow of greed, that is.
Anakin: What must I do, Master Yoda?
Yoda: Train yourself to let go of everything you fear to lose. 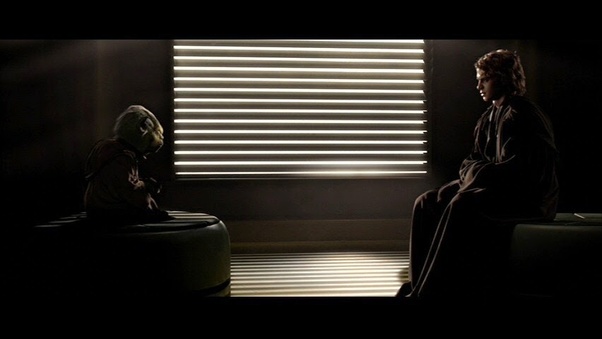 Anakin visits Yoda in the Jedi Temple, Star Wars: Revenge of the Sith.

Now, some have pointed out that this advice is terrible, or at least unhelpful given the situation. It has been argued that the lack of emotional support from the Jedi, combined with the lack of a proper channel for his emotions, makes it all too easy for Anakin’s fears to consume him, leading him to the dark side.
Nonetheless, it is very Stoic advice. What it amounts to is this: it is not that we must let go of everything we fear to lose, but that we must train, or be prepared to do without those things. We must train ourselves to let go, to be ready, when the time comes, to accept that “we live among things that are destined to perish” (Seneca, Letters from a Stoic).
Now, you might think that Yoda was being a hypocrite. After all, isn’t everyone afraid of death? Certainly a lot of people are! However, Yoda faces his own death with an exceptional Stoic disposition.
When Luke returns to visit Yoda, Yoda has grown weak and knows that he will die soon. Some of the last words he and Luke share in his little hut on Dagobah are the following:

Yoda: Soon will I rest. Yes. Forever sleep. Earned it I have.
Luke: (pleading) Master Yoda, you can’t die.
Yoda: Strong I am with the Force, but not that strong. Twilight is upon me, and soon night must fall. That is the way of things… the way of the Force. 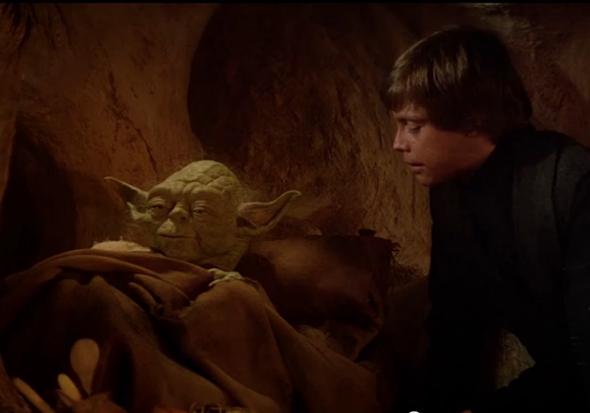 Yoda’s final conversation with Luke before he dies, Return of the Jedi.

This acceptance of death is not easily come by. It takes discipline and being prepared to let go of the things we fear to lose—even our own life. One who cannot let go will try in vain to hold on—will try in vain to struggle against the course of Nature. Yet, according to the Stoics, what attitude are we to have towards that which is not in our power to change? Acceptance. The same goes for the Jedi.
“Don’t demand that things happen as you wish,
but wish that they happen as they do happen,
and you will go on well.”
~ Epictetus, Enchiridion
3. Don’t give into the dark side
Now, I’ve referred to the “dark side” of the Force several times. But what is it exactly? Yoda and Luke have a conversation about it while training:

Yoda: A Jedi’s strength flows from the Force. But beware of the dark side. Anger, fear, aggression—the dark side of the Force are they, easily they flow, quick to join you in a fight. If once you start down the dark path, forever will it dominate your destiny, consume you it will…
Luke: Is the dark side stronger?
Yoda: No, no, no. But the easier, more seductive.
Luke: But how am I to know the good side from the bad?
Yoda: You will know when you are calm, at peace; passive.

Anger, fear, and aggression, the passions the Stoics cautioned against, constitute the dark side of the force. And, as Yoda and the Stoics understood, these passions are easier to give into and more seductive than what we know to be the case when we are in a calmer state of mind.

Luke gazing out at a binary sunset for the last time, The Last Jedi (Concept art by Seth Engstrom).

When we are calm, we know that there is no point in giving into anger. After all, what does it do? Does it solve the problem? Does it make the person fix what they did to you? No. That is out of your control. Does fear itself prevent the thing you fear from happening? No. If it is in your control, then what is there to fear? And, if it is not, what point is there in fearing it? There is nothing you can do. These same reflections apply to aggression and other destructive passions of this sort.
Is it easier to give into these passions? Yes. Is it to our advantage? No.
The Jedi, like the Stoic, recognizes this, and so resists the dark side.

you. The higher region of the universe, being better ordered and near to the stars, is condensed into no

cloud, is lashed into no tempest, is churned into no whirlwind; it is free from all turmoil; it is in the lower

regions that the lightnings flash. In the same way the lofty mind is always calm, at rest in a quiet haven;

crushing down all that engenders anger, it is restrained, commands respect, and is properly ordered.

In an angry man you will find none of these things.”