Sophocles Antigone: One Woman Against the State 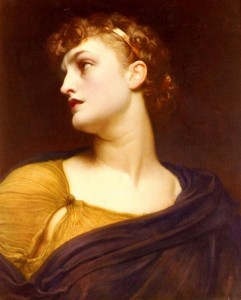 “My nature is to join in love, not hate” – ‘Antigone’ in Sophocles Antigone.
Maybe it’s no surprise then that this individual found herself on the wrong side of the state. The powers that be probably didn’t appreciate either, that this adversary came from the oppressed class, one of the current underdogs of their society – a woman.
And what happens to a newly crowned king when such an opponent threatens him before his authority sets in? Does he take considered actions and reason out the situation? Does he look at the crisis from all points of views and contemplate what is best for the city he rules? In the case of Creon in Sophocles Antigone, the answer is a resounding no.
A man, who at other times had been the voice of reason, grows tyrannical and obsessed with his own law. He represents an unstable nation-state that figures itself higher than all other laws, both natural and religious. And those who oppose his unjust rulings, who struggle against unfair governance, are destroyed.
All that is left then, is the consideration, the weighing in, of the risk and reward of standing up to the state.
The story is the last in the Oedipal myth series, though the first written by Sophocles. It continues on from Aeschylus’ Seven Against Thebes. Oedipus, the original self-blinded, ill-fated character, who committed both patricide and incest, is dead and gone. His two sons have fought to take the throne and have both died by the other’s sword. However, one man was protecting the seven-gated city of Thebes, while the other was attacking it.
This is where the problem begins. 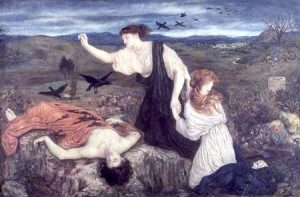 Antigone and Ismene mourning for their brother

The former goes down with hero status. The latter, fighting with foreign friends, does not. He should be consumed by the crows and denied a proper burial, or so says Creon, the next of kin and therefore King. He publicly decrees as such, labeling the lad as an enemy of the state. Unfortunately for him, Antigone does not agree. As sister to the foregone fighters, she feels it is her duty, under the traditions and divine laws, to see that the condemned soldier sleep beneath the earth.
She initially attempts to recruit her sister Ismene. They secretly meet outside the city walls, outside the law itself, to concoct a plan so their brother’s soul can find peace. The second sister, however, fears death, men and the regal rule that threatens a stony demise. She does not commit and therefore finds herself disowned by her stubborn kin.
And so, Antigone, in defiance of those who rule her, steals away and sprinkles the thirsty dust on her deceased relation. The thought of his corpse, exposed to the elements and prey for fowl, digs into a core cultural concept of respect for the dead. No doubt, this imagery, so horrific, was Creon’s design. It is a reminder to all the citizens of what will happen if they challenge the state.
Once the forbidden rites are revealed, a poor sod, a sentry, is sent with the task to inform King Creon. The monarch is not happy. He threatens and thrashes out at the watchman, promising him a fatal punishment if he does not find the culprit.
A trap is set. The body is washed of its earth and put out on display while the soldiers keep a lookout, under threat of death. Sure enough, Antigone takes the bait, incensed at what has happened. This time the sentry, knowing he is off the hook, happily returns to the enraged ruler with the unforeseen outlaw.
Antigone stands strong in front of the tyrant. She does not deny a thing, for what would her defiance mean if she did? The epitome of a heroine she faces her opponent unflinchingly, uncompromisingly and condemns his injustices. She tells him what no other has the gumption to say, that his law is not right. His law is an affront to decency and to the Gods. He has no ruling over the dead.
Her punishment: death. Ismene tries to turn herself in, so she may die with her sister, but Antigone has none of it. Not out of sisterly love, but because she did not actually help to bury the brother and does not deserve the honor. The two are taken away nonetheless.
At this time Creon’s son, heir and future, enters. Haemon is also betrothed to Antigone, and the chorus reveals to us that it is of mutual love. He begins speaking to his father out of respect, promising loyalty and agreeing with his dad. At one point, however, he discloses a rumor running in town. “The city mourns for this girl; they think she is dying most wrongly and most undeservedly for all womankind, for the most glorious acts”. 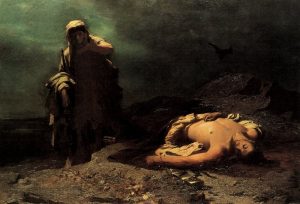 Antigone in front of the dead Polyneices by Nikiforos Lytras

Here we start to see Creon fully unravel. He develops into the epitome of a dictator and misogynist, reviled by his own son. The king chooses the state over what is right. He chooses oppression over a minority. He rants, “we must stand on the side of what is orderly; we cannot give victory to a woman. If we must accept defeat, let it be from a man; we must not let people say that a woman beat us.”
One might question if the opponent were male, would the retribution be so harsh? Nothing offends an overreaching ruler like the rise of the underclass. It these people who have to fear tyranny the most. Something many still face today.
An argument ensues between father and son, one that has the modern reader cheering for the wise youth, who demands regard for his actions, not his age. The despot declares his judgment alone should rule the city. Haemon retorts he would be a fine dictator of a desert and reminds his predecessor “there is no city possessed by one man only.” But the old monarch rebuffs with the argument that king and country are one… and his.
Furious, Haemon promises his father will never see him again and quickly leaves.
Now Creon knows he does not have the public support he initially sought. The communal stoning he originally promised won’t do. Instead, he decides to entomb Antigone, so she can be with Hades, the God of death. Ismene, however, is let go.
Once the deed has been done, the old blind prophet, Theiresia enters. Castigating the king for putting the dead above the ground and the living below, he warns him it will be his demise. Eventually and after many bitter words, Creon listens to reason and attempts to undo his mistakes. Unfortunately he is too late. 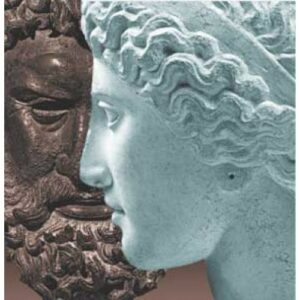 The violence ensues off stage. While Creon resignedly buries the fallen warrior, Antigone, forlorn by her fate, hangs herself. Haemon finds her, attempts to assassinate the king and then falls on his sword. Reminiscent of Romeo and Juliet, he cradles the woman he loves as he passes away.
But death doesn’t stop there. Finding out about her son’s end, the wife of Creon also expires by her own hand. At this point, the fallen ruler fully realizes what he has done and despondently quits the stage.
They don’t call it a tragedy for nothing.
But what can we take away from these grisly endings? The overbearing sovereign and the young woman who stood up to him? She may have met a sad ending, but she also took her oppressor with her. She, as a woman, represented the underclass, but nonetheless, faced an unlikely fight and stood up to an absolutist.
Perhaps then, it is not shocking that modern history has used this powerful text of resistance. One of the most famous examples is Jean Anouilh’s 1944 Paris version ofAntigone, which was produced during world war two. It was potent play for his countrymen during the Nazi occupation. It was reminder to remain strong and defiant, because, in the end, the conflict between the state and the individual was as relevant then as it is now.
Antigone was written by Sophocles around 441 b.c. It is the third, sequentially of Sophocles’ Theban plays. You can read the full story here: https://classicalwisdom.com/greek_books/antigone-by-sophocles/
Staying with the individual versus the state theme, we will move onto Plato. Tune in next week for a look into his Apology. You can view the whole text here beforehand for free: https://classicalwisdom.com/greek_books/apology-by-plato/
Facebook