Hippolytus: The Man, The Myth, The Legend

by Jocelyn Hitchcock on February 7, 2019

By Jocelyn Hitchcock, Contributing Writer, Classical Wisdom
It sounds like something straight out of a modern –albeit extremely tragic- weekday soap opera: step-son (Hippolytus) incurs the wrath of someone higher up (Aphrodite) because he fails to honor the cultural customs associated with her; scorned woman (Aphrodite) initiates plan of revenge on step-son by having step mother (Phaedra) fall in love with him; step-son rejects step-mother’s advances; step-mother kills herself and blames it on step-son; father (Theseus) exiles step son; father discovers truth; father is racked with guilt; father and son make up; son dies.
All that’s missing is a bad plastic surgeon and someone miraculously coming back from a full brain transplant. 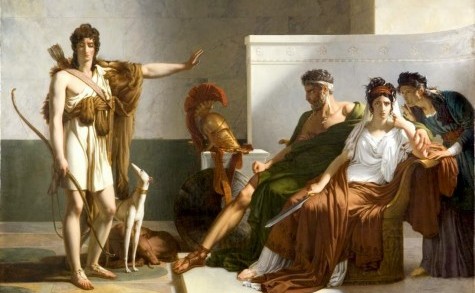 Crop of Phaedra and Hippolytus (1802), by the French neoclassical painter Baron Pierre-Narcisse Guérin (Louvre, Paris). The painting manages dramatically to squeeze in several elements of the plot: the youth expresses his resistance to Phaedra, even as the nurse whispers in her ear; meanwhile Theseus clenches his fist in rage.

It’s a story about love, deception, honesty, and vengeance. The characters, both human and divine, are deeply flawed and show a sweeping range of human emotion and spirit.
Written by Euripides, the play Hippolytus won a performance contest as part of a trilogy in Athens in 428 BCE. The play is part of a larger commentary and myth sequence based on Hippolytus, and many stories focusing on Phaedra herself. Versions by Seneca the Younger (Phaedra), Ovid (Metamorphoses and Heroides), and the much later Jean Racine (Phedre) all contribute to our understanding of Hippolytus as a character and Hippolytus as a legend and play. 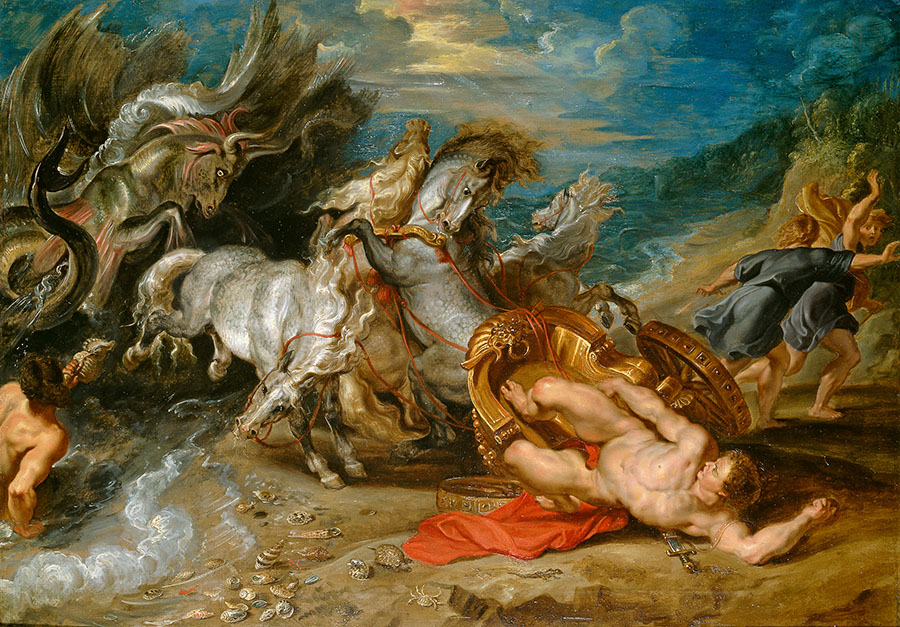 Euripides’ Hippolytus
The play itself focuses on the theme of love, and particularly love scorned. It should come as no surprise then that we find Aphrodite, vengeful and cunning as she is, at the center of the whole drama. At the start, Aphrodite explains that Hippolytus refuses to honor her, having sworn a vow of chastity to Artemis, goddess of the hunt. Disregarding warnings from others to show respect to Aphrodite, Hippolytus remains steadfast in his commitment to Artemis- something that sets Aphrodite on a path of revenge.

Phaedra agonizing over her love for Hippolytus. Phèdre by Alexandre Cabanel

While serving a year of voluntary exile in Troezen in the northeastern coast of Peloponnese after murdering a local king and his sons, King Theseus of Athens and his second wife Phaedra come into contact with Theseus’ bastard son, Hippolytus. Hippolytus was the product of King Theseus’ rape of an Amazon woman, Hippolyta, and had been reared all through childhood in Troezen by King Pittheus. So, already there is a distance between Hippolytus and his father. However, Aphrodite sees this as a chance to enact her vengeance and makes Phaedra fall in love with Hippolytus, her step-son.
Phaedra begins to fall into the state of love sickness and won’t eat or sleep- all of which the chorus and Phaedra’s nurse are witnessing but are sworn to secrecy over. Phaedra, not wanting to bring dishonor on her family, resigns herself to starve to death. Her nurse, though, directly going against Phaedra’s wish to die without Hippolytus knowing what was going on, went and told. Hippolytus then flew into a fit of rage not just against Phaedra, but against all womankind to the point Phaedra thought her only option was to hang herself. She did so, and left a note insinuating that it was because Hipolytus’ raped her. 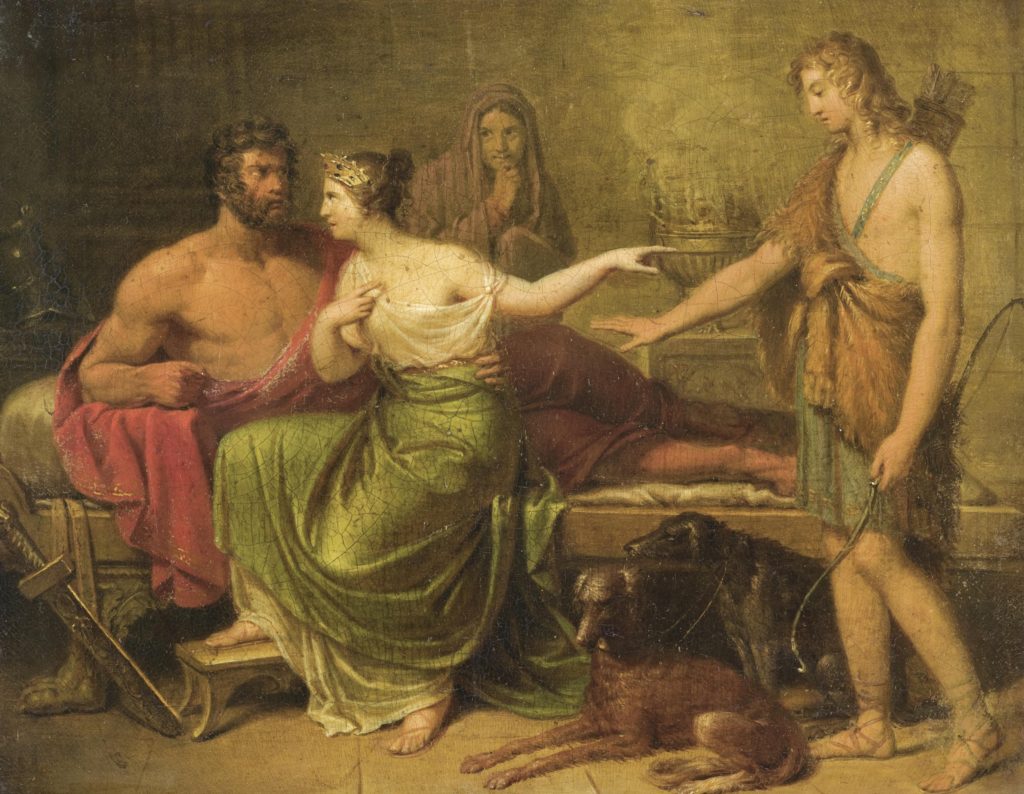 After her death, Theseus finds his wife and the note and banishes his son, calling down a curse from Poseidon. Despite his protests of innocence, Hippolytus flees the city. The curse from Poseidon produced a sea monster that spooked his horses, resulting in Hippolytus being dragged along the rocks, dying. Theseus was thrilled to see Hippolytus suffering, since he still believed him to be responsible for his wife’s death… that is, until Artemis appears and tells him the truth. Hippolytus forgives his father for his own death as he is carried away and Artemis promises to exact revenge on Aphrodite. 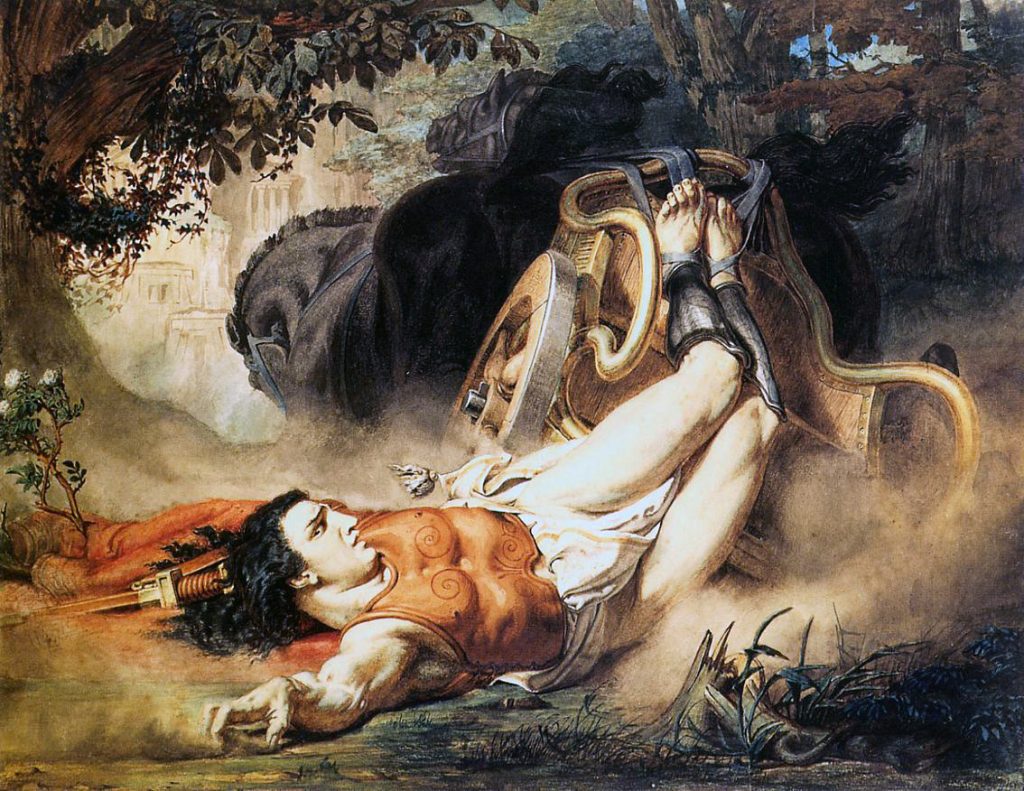 Of course, the story portrayed by Euripides is perhaps the most well-known about Hippolytus. But he is more than just a play. In honor of Hippolytus, virgin maidens before their weddings would cut off a lock of hair as a dedication. There was also an ill-defined mystery cult to Hippolytus, a temple to Hippolytus in Troezen, and conflated stories combining Aphrodite and Hippolytus, and Phaedra and Hippolytus, linking them as symbols of love.
There is no doubt that the story of Hippolytus, especially as presented by Euripides, is a tragedy. It demonstrates just how powerful divine and human emotions can be, with love, vengeance, and guilt being portrayed as simple truths of humanity.
Facebook